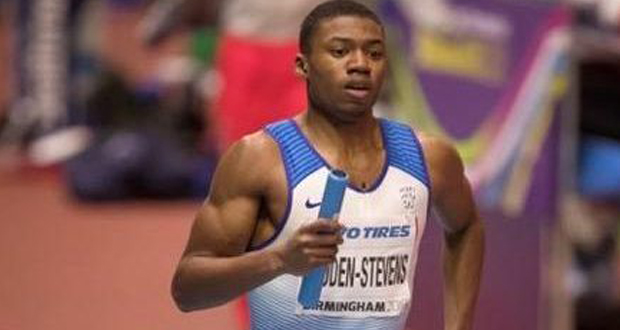 Running for the record: KU graduate sprints to success in Japan

Written by Eddie Luchford on October 17 2019

He described competing in Yokohoma with Team GB as “a great feeling” and said that he “felt we could have gone faster, but that’s life”.

“My advice would be to set out goals but never limit yourself, athletics is a mental sport as much as it is physical.
“Managing expectations on yourself and what others put on you takes time. It’s best to take the pressure off yourself and enjoy the sport. For me, the number one priority is to be happy.”

He describes his daily routine as rigorous: “I get up at 7 am every day even on weekends, eat, and then head to the track to get warm. After that, I head straight to the gym for a good stretch and recovery session then go again. When I was at university, I would fit my training around my studies and make sure to drink a lot of water to stay hydrated.”

A relatively new event, the mixed 4 x 400 metres, which will debut at the Olympics next year in Tokyo, was first introduced to International Association of Athletics Federations (IAAF) competition in 2017. The hope was that having two men and two women combined would lead to exciting races, as big leads could be overhauled with lots of takeovers as the teams decide what order to run in.

However, even with the event still in its infancy, a recurring theme is beginning to show with every team in the World Finals this year opting for male athletes on the lead and anchor legs.

Despite setting the new national record, Rhoden-Stevens and his team were less than two seconds off the pace and fell just short of qualifying for the final, which was won by a star-studded team from the United States.

A USA team, which included some of the same runners, broke the world record in Doha, Qatar only a couple of weeks ago. Rhoden-Stevens, who graduated from Kingston last year having won the University sportsperson of the year award, did not begin proper athletics training until he was 18-years-old. He used to enjoy long jump, never training and just turning up to open meets for fun.

It was only when he started breaking school records that he realised how talented he was. His father, who had run for Herne Hill Harriers, got him into track initially as a 100m and 200m runner.

Having spent a lot of time on the treatment table at the start of his sprinting career, Rhoden-Stevens decided to make the change from the notoriously unforgiving sprints to the one-lap 400m which focused more on control than explosive speed.

Brand deals are crucial for young athletes as National Lottery funding is renowned for its inconsistency, with a tendency to be there one year then gone the next.

His sights are now set on the 2020 Olympic Games in Tokyo and the European World Athletics Championship.