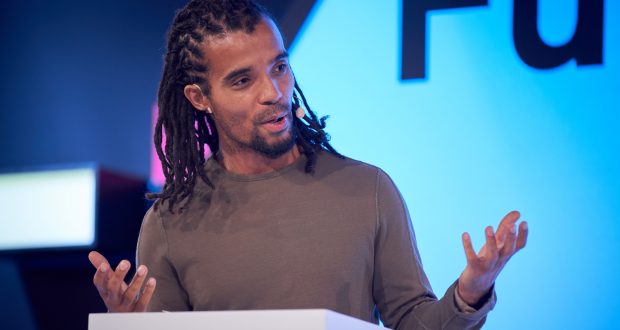 Written by Bekka Barnard on October 4 2019

Rapper, journalist and political activist Akala visited Kingston University on October 3 to give students a semi-autobiographical talk titled ‘The Power of Education’.

The event was held in celebration of Black History Month, which runs through October.

The author of the Sunday Times bestseller ‘Natives’ aimed to bring awareness of the struggles that the Black community have and continue to face, and to teach listeners about the importance of both state and unconventional education through his inspiring story, all while maintaining his usual humble nature.

Last year Akala (real name Kingslee James McLee Daley) was awarded two doctorates from two separate universities – a Doctor of Arts by Oxford Brookes University in June 2018, and the same month gained a second doctorate from the University of Brighton.

The BAFTA and MOBO award-winning rapper began by recalling the racial profiling he received from a teacher while in school: “When I was seven years old, I was put into a special needs class for kids that don’t speak English. I didn’t have special needs, and I was born here. I was reading Lord of the Rings at home, and ‘the cat sat on the mat’ at school while drinking hot chocolate and eating biscuits. As I got older, I realised that I was being rewarded for failing.”

He continued to reflect on how he was underestimated at school: “It made me feel as though I’d done something wrong. My experience was in no way unique, but it was very valuable to me because it showed me that some teachers would be offended that I was a bright black boy and that they couldn’t wrap their minds around it.

“I saw very early on what a difference the adult whose care you are put into makes.”

Alongside these, he shared a newsletter from his Pan-African Saturday school with the audience, which featured a picture of five-year-old Kingslee and the quote ‘we do better work here’.

“Even at five-years-old I understood there was something that I was getting from my Saturday school that I wasn’t from my other school,” he said.

“Now I’m older, and I look at my peers that didn’t have this kind of cultural support, I realise how important it was. “These schools were a massive part of my life and part of the reason I think I’ve been able to navigate life.”

Akala also touched on the importance of the arts in education. His stepfather was the stage manager of the Hackney Empire Theatre, which he explained was “London’s equivalent to The Apollo” in New York.

“I was seeing four pieces of theatre a week, I was young, so I took it for granted, but I don’t think it’s any coincidence I’ve gone on to do the stuff I have with The Hip-Hop Shakespeare Company.”

After sharing sobering anecdotes of life as a young black male in North London, he revealed that the main contributor to his success is his ability to learn independently. “In life, you’re going to get one particular kind of education, especially if you go to a state school,” he explained.

“They might have business studies, but they are teaching you to work at a business, not to run one.

“I left school with A’s in virtually everything, but I didn’t know what a loan or a mortgage was.

“You need to take two sets of notes – one to pass the test and one to better yourself.”