Written by Sophie Humphrey on October 24 2019

Kingston’s environmental society @Kuenviro has already made an impact, boasting 30 members to date without heavy promotion after running for only a month since September.

The society is run by third-year biomedical students, Lucie Dyer and Maddie Fleetwood and has already hosted two meetings with a successful turnout of students.

Vice President, Fleetwood said: “I think we all have a mutual interest in a subject. The university didn’t have an environmental society there, so why not make one?”

Interviews have already been held for positions on the society’s committee and other job roles.

In the meetings, the group has established that they want to make changes to the university’s recycling system and educate people on the importance of sustainability.

Society President, Dyer said: “We had a meeting with the society about things we wanted to change within the university, and one was to improve the recycling here. There are one general waste and one recycling bin that people don’t use properly.”

Kingston University has implemented several measures of sustainability such as using  Vegware products, promoting Fairtrade items and involving students in sustainability projects like Student Switch Off.

Despite these measures, Kingston has still received criticism for continuously using plastic cups in the canteen and the amount of waste produced due to the two-bin waste system.

A spokesperson for Kingston University responded: “The University is committed to protecting the environment and encourages all students and staff to get involved in its wide-ranging recycling initiatives.”

They added: “Food waste put in the wrong bin contaminates the rest of the waste meaning it can no longer be sent for recycling. The University works hard to actively remind students and staff about which bins should be used to dispose of particular products.”

Both girls hoped to create a list of suggestions for Kingston to improve its environment to be implemented before they graduate next year. 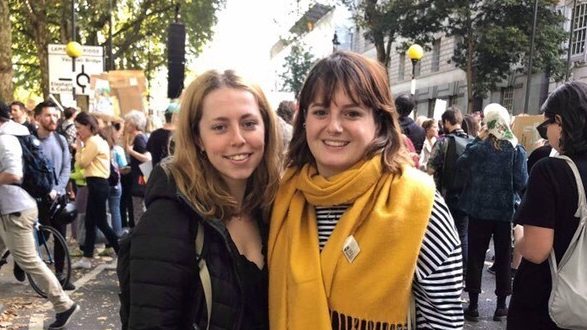 Lucie and Maddie at a climate strike in Milbank Photo: Lucie Dyer

Another big aim on this list is to reduce plastic use across the university’s campuses.

“One thing that the university could do is reduce its plastic use. Everything is in plastic. They still give out plastic straws. The university has tried to go for the Vegware option which isn’t necessarily the best one, but at least they are trying,” Lucie said.

If you have any ideas on how to improve the environment at Kingston, please email kuenvirosociety@outlook.com or message @kuenviro on Instagram.