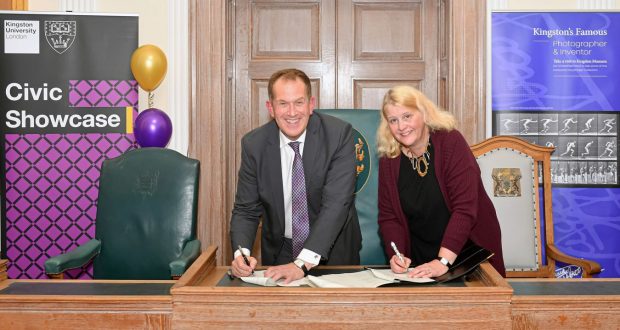 Written by Charlotte Dorans on October 15 2019

Kingston University is bringing Eadweard Muybridge’s personal collection to the new Town House with the help of Kingston Council.

A memorandum between Kingston University and the local council is held to return certain items back to Kingston, some of which will be placed in the new Town House on Penrhyn Road alongside the university’s other archived collections.

The collection includes 67 of Muybridge’s famous zoopraxiscope discs which allowed him to create moving images, and 150 collotypes prints that preserve fine details. Muybridge entrusted this collection to Kingston Museum before his death in 1904 but some pieces have made their way outside the borough.

Eadweard Muybridge was born in Kingston in 1830 and is considered a huge pioneer in modern photography, best known for his stop motion photographs. His most famous work ‘The Horse in Motion’ is considered extremely influential in current animation and cinema.

Animation and Illustration student Julia Jarzabek, said: “His work is one of the earliest examples of animation so his ties to Kingston are really exciting.”

“Especially since Kingston University offers animation degrees, it would be a missed opportunity if they overlooked his art,” he added.

The partnership has been in the works for over three years and was finally signed at the Kingston University Civic Showcase on October 14 between Kingston University’s Vice-Chancellor Professor Steven Spier and Council Leader Liz Green.

Councillor Green says that Eadweard Muybridge’s contributions to photography were immeasurable. “It’s wonderful to see one of Kingston’s most famous historical figures celebrated in his home town in this way,” she said in a recent statement. “He sits at the heart of the borough’s cultural identity.”

Professor Spier stated that the collection is the ‘jewel in the crown’ of the borough’s rich cultural history: “Kingston University is delighted to play its part in helping embed Muybridge in the DNA of Kingston by reuniting the collection he bequeathed to the town.”

“This collaboration with the council epitomises exactly what we want our new Town House building to represent- a space where both the university and town are enriched.”

The pieces will move into the Town House next summer.