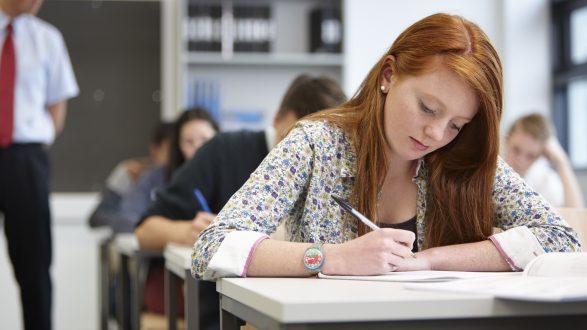 Students may have their exam retakes earlier in the summer Photo: RexFeatures

Written by Natalie Crookham on November 28 2019

Kingston University has decided to investigate changing the exam retake period for the 2020-21 academic year.

The current resits take place in the last two weeks of August, with results being released a week before term starts, which some argue is too close to the new academic year.

Kingston University wants student opinion on when to schedule the retakes by completing their survey or writing on the poster on display in the Student Union at Penrhyn Road campus. They have suggested four new time frames for the exam retakes, July 8-19, July 15-26, July 29-August 9 or August 5-16.

Muneer Muhammed, education officer at the Student Union, said: “Being at the end of August means students won’t find out if they can progress to the next year until September, which can affect enrolment, student finance and housing.

“The University wants your opinion. Movement of the period could have both positive and negative impacts.”

Although this would give less time for revision, students would be able to have a break from their studies during the summer.

It also gives time for students to sort out any problems that arise from the results of their retakes ahead of the start of term.

A spokeswoman for Union of Kingston Students said: “We want to make sure every Kingston University student has the best experience they can.

“That’s why we’ve been inviting students to share their opinion.”

Psychology graduate Isa Mara Paiva failed an exam in her first year at Kingston University and had to retake it at the end of August.

The exam was late in the summer which delayed her enrolment into the second year and caused concern.

“I was not sure what to do and whether to have a backup plan in case I did not pass,” she said.

Paiva had to commute for her exam as she no longer had accommodation in Kingston.

She also believes it delayed her student finance application.

“At that time you are supposed to have figured things out but because I had my exam so late everything was depending on it until I got the results back.

“If I had the exam earlier, I would have known if I passed or not and could have decided what to do for the following year in terms of finance and housing,” she said.

Second-year English Literature student Sofia De Leon said she was unsure if the retake period should be changed.

She said that students should be given plenty of time to revise for their resits after the exam season.

“The current exam retake period gives more time to prepare, although getting your results in September is a bit stressful as you are wondering if you are enrolled or not so close to the start of the academic year,” she said.

Third-year law with professional experience student Faustina Edward has never had to retake an exam but was positive about the change.

“It is good to have them earlier so you are able to make arrangements for the new term,” she said.

A Kingston University spokeswoman said: “The University is currently consulting with staff and the Union of Kingston Students on the possibility of moving the exam retakes to earlier in the summer.”

She said that at present the retake results are published close to the start of the next academic year which can cause difficulties if students decide to appeal.

“The proposed changes would also lead to improvements in the release of timetables and enable students to make accommodation and other arrangements earlier than they can currently,” she said.