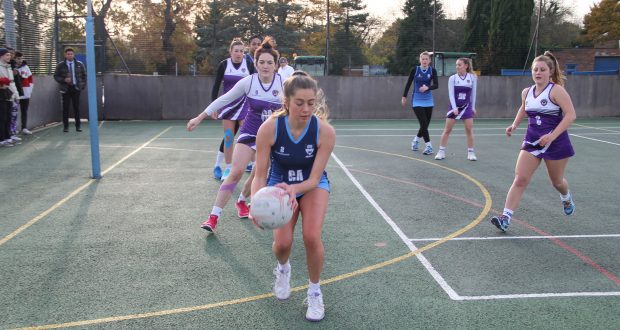 Lucia Stephens on the ball

Another victory for KU on Wednesday after the netball team won 39-35 against Portsmouth University’s second team at Tolworth Court
Sports Ground.

The team played strongly and remained in the lead for the entirety of the game.

Goalkeeper and player of the match Sandra Okoh said: “It was a tough match, but we expected a close one,”

“We were fantastic, everybody was hungry for the ball and we fought well as a team.”

The team started the first half of the game steady and Okoh said they were “seeing how the other team played.”

The teamwork shown throughout the match was excellent, particularly a great relationship of the defending players.

By the third quarter, the team had gained comfortability and rhythm with their play, ending with an incredible lead of 31-24.

They began to intercept more passes and looked solid and controlled in their defence.

An excellent performance was given by goal attack Lucia Stephens and goal shooter Jasmine Murray, who, once again, worked well to control all rebounds and score 39 goals between them.

Okoh added: “Even though there was a few of us injured during the game, we didn’t stop fighting for possession.”

This is the team’s fourth win of the season, making it a victory for every game they have played.