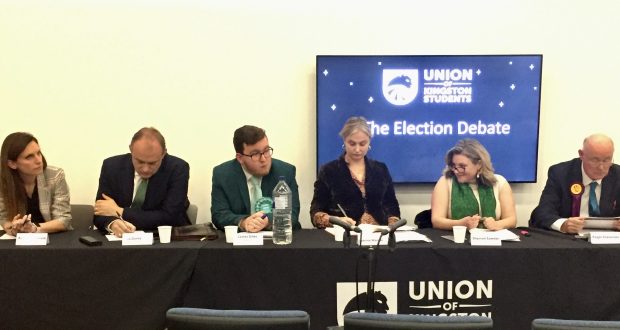 Written by Charlotte Dorans on November 28 2019

Kingston University students and local residents discussed the future of Kingston after the general election as the first election debate was held at Penrhyn Road campus on November 26.

Arranged by the Union of Kingston Students, the debate allowed the representatives of competing potential MPs to talk about their policies and answer questions from the audience as well as social media.

President of the Student Union, Feisal Haji gave an opening speech, encouraging those who had not registered to vote to do so: “It’s your right as a citizen.

“You owe it to yourself to choose who will create a better future for those who come after us.”

The representatives for each party were then given the opportunity to talk about their policies and what they hoped to achieve if they are elected as Kingston and Surbiton’s MP, starting with Labour candidate, Leanne Werner.

Werner talked about a future under a Labour government, aiming to reach a “thriving green economy” and how everyone in society would be valued.

“I want to be your next MP for Kingston and Surbiton because I believe we deserve a fairer future,” she said.

Both the Green Party and Liberal Democrats candidates, Sharron Sumner and Ed Davey, expressed concern about the rise of climate change.

Sumner said: “Our new plan for a new, green deal and programmes of reform will transform the UK and improve the quality of everyone’s lives by creating a fairer safer future for all.”

One of the big topics of debate was Brexit. Ed Davey said in his opening remarks that this is the first general election to be dominated by a major subject and with new issues being raised about freedom, trade and security against potential threats from Putin’s Russia, the only way to stop Brexit would be through a democratic mandate.

However, Aphra Brandreth, representing the Conservative party, said that while she appreciated that some people were not happy with the outcome of the 2016 referendum, people’s votes should be respected.

She said: “We can’t just go about deciding when we don’t agree on the outcome of the vote, that we are going to hold another referendum.

And what if you don’t like the outcome of that, are you going to hold another one after that? I mean where does this end?”

James Giles, an independent party candidate, stated that focusing on Brexit is failing to address the more crucial issues in the country such as schooling, rising crime and cuts to the NHS, which with his position as an elected governor of Kingston Hospital has allowed him to see the impact first hand.

Most of the representatives agreed that more staff and better mental health services needed to be a priority, due to the stress being placed on current NHS nurses and doctors due to staff shortage and long waiting times.

As the debate came to a close, the candidates gave their final remarks about how they can bring change to the government.

Giles believes that Kingston needs a fresh start and as an independent candidate, he will be a voice for Kingston: “I will be the voice of Kingston in Westminster, not the voice of Westminster in Kingston.”

Werner and Brandreth expressed how important this election is to bringing change to the UK.

“I think this an election where we can really change for the better,” Werner said.

The next election debate will be held at Kingston Hill campus on December 5.