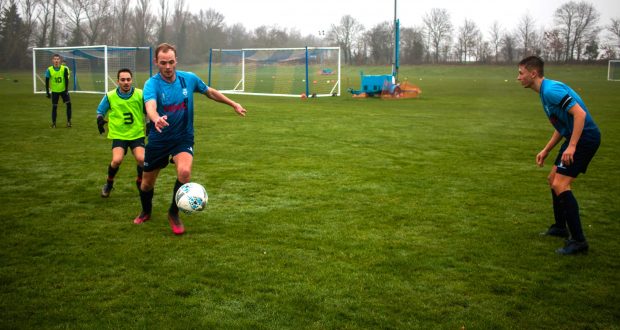 It was an easy win for Kingston on Wednesday. Photo: Marie Mannes

Kingston University’s men’s 2nd football team controlled the game on Wednesday when they won a huge 9 – 2 against Medway’s 3rd team at Tolworth.

Within the first few minutes, striker Umeh Ebube Casmir found the back of the net with an impressive shot, the first of many.

Coach Oscar Kotting McMillan said he was pleased with the result: “We played ruthlessly which we’ve been drumming into the boys in training.”

McMillan added that he was thrilled with the men’s effort.

“We are really getting down the philosophy for the boys,” he said.

Though the whole team played excellently throughout the game, McMillan singled out player Hussein Omar in particular.

“Hussein scored a hat-trick so you can’t take that away from him,” he said.

Ready to go again next week

Despite his individual accomplishments, Omar was mainly focused on the team’s overall performance.

“We got a big win today, and we go again next week,” Omar said.

They remain undefeated at the top of the table. Omar said that he was happy with how the game went and that they had a clear strategy.

“We tried to get behind them, and we got quite a few goals in,” he said.

Disappointed but still looking up

Kingston scored goal after goal with Medway not scoring until the second half of the game.

McMillan said: “Obviously I am a little bit disappointed with the two goals. We would ideally walk away with a clean sheet, but it’s not a bad thing to moan at when you’ve scored nine goals.

“The team played really well, and I’m pleased with the way the season is going. This is just another step in the right direction to hopefully winning the league,” he said.

He added that he was looking forward to the season, and hoped that the team could maintain their lead at the top of the highly competitive table for the rest of the season.