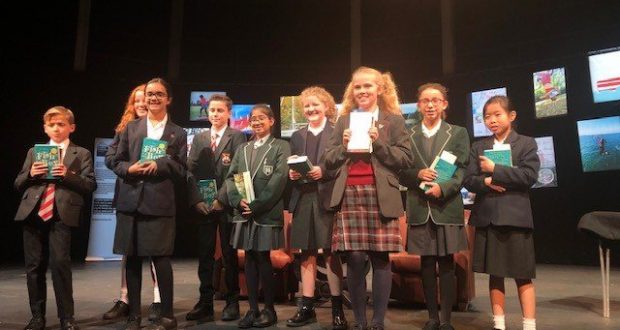 Secondary school pupils in Kingston at the Rose Theatre after their shared reading experience Photo: Read Up!

Kingston University plans to make The Big Read a borough-wide scheme for secondary schools in Kingston upon Thames.

The shared reading scheme, Read Up! Kingston, is an initiative born from the success of the KU Big Read, which allows for a smoother transition between educational institutions by introducing a book to all students to create common ground.

The scheme was launched with five secondary schools in Kingston last year.

Founder of the project and publishing lecturer Alison Baverstock said: “It was very successful, and now that’s sort of galloping along, the borough is very keen to do it across all schools.”

Catherine Fenwick, from the partnership scheme AimHigher, noticed the success of the project at Kingston University and reached out to implement it in local secondary schools.

This will be the second year of the scheme for 11-year-olds and Baverstock is encouraging schools to take it forward and make it their own by selecting their own book and adapting it to meet their needs.

Baverstock has been working with AimHigher to implement the shared reading scheme and said: “I’ve always tried to make it anybody’s project so that anybody can share it.”

However, every school needs a committed coordinator to make it work, which can be challenging.

Fenwick said: “With the funding cuts and time it takes… some of the schools are noticing that they are not quite in admiration to make it work so it will be interesting to see how it grows.”

Looking to the future Baverstock is enthusiastic about its development and said: “I’d love to try one for children starting school, four-year-olds.”

The feedback received from schools taking part in Read Up! Kingston showed that the initiative not only helps pupils with their school transition but also significantly helped to improve behaviour, bringing down the necessity of “second-teacher interventions” by 60 per cent.

While the shared reading initiative continues to grow and develop, Kingston University is getting ready for the sixth edition of the Big Read to be announced at the end of June.

From over 130 nominated titles and after following an algorithm, students and staff have narrowed the decision down to six books which will be announced in the next few days.

The chosen book will be sent out to new students and available around campus from June.