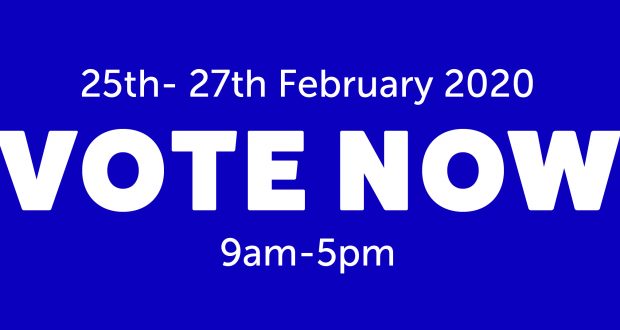 Voting for the the Student Union elections is now open

Student Union elections: Who should you vote for?

Voting for the annual student union elections is now open.

Candidates for the four main officer positions will be vying for your votes over the next few days, so here is a quick guide on each candidates’ policies and aims.

Click on each candidates’ name to see their full manifestos to help you decide on who vote for this year.

If you believe none of the candidates for a given position represents you well enough, you can also vote to reopen the nominations (RON).

Voting will be open from 9am-5pm on Tuesday 25 March to Thursday 27 March, with the final results being announced this Friday at 4pm.

The Union’s President is the leading voice of the Union and is in charge of representing KU students at the highest level, as well as the Union’s functions and organisation.

Current President Feisal Haji is running for a second term, with some of his key policies being to ensure all university jobs sponsor visas for international students, to support students with housing issues, and to increase employability opportunities for students.

Former student trustee and rival candidate Abby Grant will also be asking for your vote in her presidential campaign.

She wants to protect all minorities within KU, develop a sense of community through new events, improve the transparency of the Union, and increase KU’s sustainability ranking.

Last month, Grant stepped down as a student trustee due, after claiming she was bullied and harassed during her time on the Union board.

However, Haji had also accused her of being Islamophobic and not following the Union’s code of conduct at this year’s Student Union Annual General Meeting.

Three candidates are running for the Activities and Development position, which will put the winning candidate in charge of sports teams, societies, and other opportunities.

One of the key topics that candidates were questioned on at yesterday’s hustings event was the funding and budgets of societies and sports teams.

Each candidate has offered their own solutions to alleviating the financial problems faced by societies and students wanting to join those societies.

As the current Activities and Development officer, Muna Ali is asking for students to re-elect her so that she can increase the sustainability of each KU campus, build a strong volunteering and skills development department, and create a sports and societies development programme.

Third-year journalism student, and multi-media editor for The River, Sarangi Anand, is also running for the position.

Her policies including the introduction of an impartial payment system to help societies and sports teams with budgets, regular updates for students on upcoming events, sports and opportunities, and putting on an annual talent showcase and recreational sports event at the end of each year.

Third-year motorsport engineering student Justin Shoulson, member of two sports teams and societies and two years experience working for the Union, wants to fix the problems with funding and communication for societies and sports teams, as well as introduce more social events to increase student involvement within the Union.

The Education Officer’s role is to focus on the educational experiences of students at KU.

Harish Loganathan, who is currently working on a Master’s degree in management in construction, says that a vote for him is a vote for you.

He wants to create a regular alumni network and mentoring scheme, provide free fruit and water before exams, and improve the laptop loans scheme.

Mohamed also has previous experience as the Education officer from 2018 to 2019.

Finally, the Welfare Officer is in charge of everything related to student wellbeing.

Questions for the candidates at yesterday’s hustings mostly concerned bullying and harassment, as well as the provision of prayer facilities for faith students.

Hamad Momin is running for a second term as Welfare Officer so that he can continue to implement his previous policies.

Since being elected, he has fought against discriminatory policies and improved prayer facilities, including a £243,000 investment allocated to expanding Kingston Hill’s current facilities.