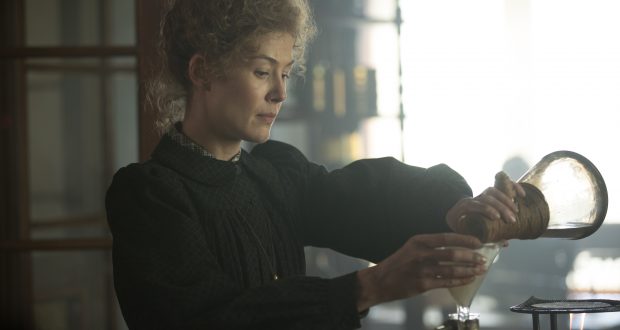 For a woman who made such a massive impact in science, why was Marie Curie’s own story and her scientific achievements not good enough to focus on alone?
At a time where acknowledging women’s success has never been so important, Radioactive is the latest feminist biopic as director Marjane Satrapi studies Curie’s life, work, and lasting influence on science.

Rosamund Pike is no stranger to playing the empowering female oppressed n a male-dominated environment as her previous credits include war photographer Marie Colvin in A private War and the seductive Amy Dunne in Gone Girl.

Curie and her husband Pierre (Sam Riley) discovered two new elements, radium and polonium, and Curie was the first person to receive a Nobel Prize in the fields of chemistry and physics proving that being a woman has no limitations in a field where gender is often exploited.

The film begins in an unhopeful and cliché fashion as Curie lies on her deathbed before her story is told in a series of flashbacks of her most significant discoveries in science and love.

However, the dysfunctional narrative flow is often disrupted by psychedelic editing to display scientific explanation, making it a desperate attempt to combine modernity and history, which makes it a challenge to become fully immersed in the film.

Screenwriter Jack Thorne fails miserably in his intention to make science sexy and instead creates a patronising imitation of Curie.

Curie’s strong-willed independence crumbles almost instantly after meeting her husband-to-be. Throughout their whirlwind romance, her independence wavers and she becomes a shell of her former self after the untimely death of her husband.

Though Curie’s sex life is no secret after an affair with her colleague following her husband’s death, there is too much emphasis upon sexualising the scientist, as demonstrated in the nudist honeymoon scene with the late husband, Pierre.

The film’s flaw is Curie’s fear of hospitals. No matter how much time you invest in scouring the internet, there is no evidence to suggest that she had a debilitating phobia of hospitals.

Unlike other biopics such as The Theory of Everything, which explores Stephen Hawking’s life, this adaptation almost seems to discredit the success of Curie by portraying her as a sexual figure and fictionalising parts of her story to give her character more dimension.