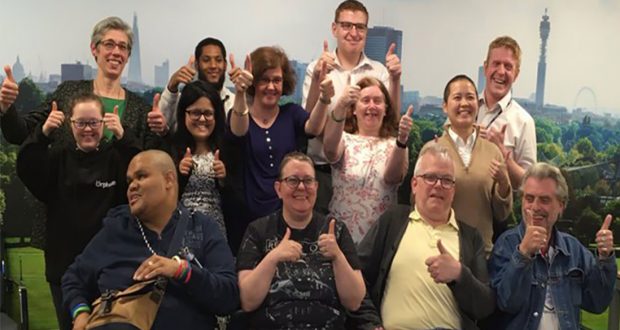 The scheme, which was set up alongside St George’s University of London, saw 10 students take part in an eight-week course where they learnt what research is, the different methods there are, and how to make the best research questionnaires.

Irene Tuffrey-Wijne, professor of intellectual disability & palliative care at Kingston and creator of the programme, said: “This course has shown that people with learning disabilities are able and willing to do research.

“They chose a topic that was really important to them, which was investigating why more people with learning disabilities don’t have jobs and found that it’s not the case that they can’t contribute to society, but more that they don’t get the chance.”

Tuffrey-Wijne wrote about the scheme in her personal blog, where some of the benefits of the programme included improved interview skills, a deeper understanding of research projects, and heightened confidence.

The programme, which was supported by a £3000 grant funded by the NIHR Clinical Research Network, currently has no plans to return to Kingston again, but Tuffrey-Wijne remains optimistic.

She said: “We managed to do this course thanks to a small one-off grant, and we are currently looking into possibilities for funding this in the future.

“I think it is important that the course is offered free of charge, as most students will be on low incomes.

“The course certainly showed us that there is a need and desire for this kind of thing.”

Many of the students who participated on the day had never received an opportunity to learn like this before.

On her blog, Tuffrey-Wijne wrote about one student who was told, due to their learning difficulties, they could not be taught – a hypothesis now false as they completed the eight-week course.

“For the future, I hope that more people with learning disabilities will be involved in research in a truly meaningful way, rather than in a tokenistic one.

“It was very exciting to see that with this training, the students really began to understand the research process, and I am convinced that our graduates are now in a very good position to apply for paid research roles and some have already taken on such positions.”