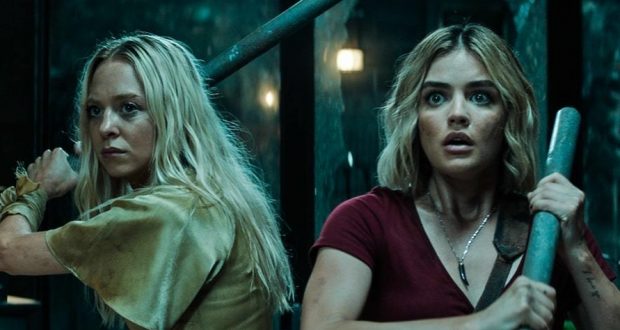 Written by Sarangi Anand on March 6 2020

Fantasy Island falls short in scares and suspense after trying to present itself as a combination of horror and thriller.

When production studio Blumhouse and director Jeff Wadlow announced its plans to reboot the popular 1970s television show Fantasy Island, the audience expected the film to be another level of terror, full of the supernatural suspense.

With previous successful releases from Blumhouse such as Paranormal Activity, Get out, and The Purge, the public had high expectations for the film.

But unlike Blumhouse’s other productions, this one is not worth the time or money.

It is hard to define the genre as the movie can only be categorised as a quickly made-up, clichéd story with two-dimensional characters that the audience struggle to care about.

The reboot follows a similar premise to the TV show, except this time with more emphasis on horror.

The story seems simple enough on the surface as it focuses on a group of people who have won a contest and arrive on a remote island.

They are greeted by the mysterious Mr Roarke, played by American actor Michael Pena, who tells the guests that they have reached Fantasy Island, and can each have one fantasy granted.

All characters choose a different but albeit quite boring fantasy.

Melanie (Lucy Hale), is a young woman who wants to take revenge on Sloane (Portia Doubleday), the popular bully who made her school years miserable.

Gwen (Maggie Q) aches for a second chance at a moment that would have changed her life, whereas Patrick (Austin Stowell) wants to be a soldier, as he was never able to enlist.

Stepbrothers JD (Ryan Hansen) and Brax (Jimmy O. Yang) just want to party together on the island as they did during their high school days.

Of course, none of the characters’ fantasies is quite what they seem, and they soon discover that the island is full of secrets.

Fantasies can be full of drama or full of laughs, but this film tried to do both at the same time, and it just did not work.

The movie plot is also somewhat confusing as the island has two rules – no new fantasies and each fantasy should be desired with a “logical conclusion”, whatever that means.

It takes the characters nearly an hour to understand the idea that they are getting to experience their chosen fantasies which results in a snooze fest of a film.

It may be more rational to think of the movie as a fusion of various genres, as each character’s fantasy runs along parallel duel narratives.

The film includes many unnecessary dialogues that add to the boredom, for instance, explaining everything about the island, rules, fantasies and how to acquire them.

This is not Wadlow’s first time working with Blumhouse, and both Fantasy Island and his previous film Truth or Dare are among their weakest films.

Both seem to lack an interesting narrative and are possibly the worst horror films of today.

The film is plagued with inconsistencies and inconveniences which weakens an already lacklustre story that not even a mediocre supposedly suspenseful scene can help.

Fantasy Island fails to give the audience on-screen horrific and chilling scenes and instead is very dull and predictable.

The script is very simple and unattractive, and the visual effects are unimpressive and get duller as the film continues.

Overall, the cinematography and the tone of the film resembles a spoof horror – what a disappointment.