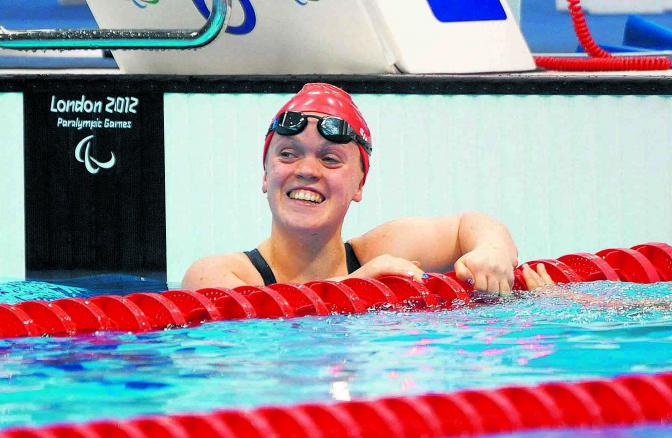 For Ellie Simmonds, the face of the London 2012 Paralympic Games, university life may be the perfect escape, but it still comes with all the typical flaws.
“I have bad phone signal in halls,” she says, laughing as she stands by the window to get a better reception. “But I enjoy being here, I like being able to go to class and not have to think about swimming.”
The 19-year-old is studying A Level psychology in Loughborough, but the college is based on the University’s campus, which means she is able to live in halls like other people her age.
“It is good to have the uni lifestyle of living in halls and not as much work,” she says. “I think I have the best of both worlds.”
After winning two swimming gold medals in Beijing 2008, Ellie, who is 4ft, became a role model for disability sport and went on to front the advertising campaign for the London 2012 Paralympic Games.
She won another two gold medals in London, along with a silver and bronze medal, while juggling her college work with her swimming.
Ellie says that studying helps her to manage a heavy training schedule.
She pauses before deciding which would take priority. “Gosh, that is a hard question. Probably swimming, because I can have an education at whatever age,” she says.
“You cannot choose when you are successful, that just comes. But with education, you can go and sit your A Levels or have a degree whenever you want.”

She is now a role model in disability sport REX FEATURES
Her commitment to swimming comes at a cost to her sleeping patterns, as her day starts when most students are just getting home from a night out.
“I get up at 4.45am and I have training 5.15am until 7.30am,” says Ellie, who then goes to classes.
“After college I can chill in the afternoon and get jobs done, then I have got an hour in the gym, followed by more swimming.
“But I can fit a nap in here and there which gets me going through the day!”
For Ellie, swimming comes with other perks.
“I get to go to loads of countries,” she says. “When we compete we have a few days afterwards to be able to visit the sights and when we go on training camps we get to visit other places too.
“I am very lucky being able to go and travel all over the world just for swimming. Brazil and South Africa were my favourite places.”
For Ellie, the chance to travel is accompanied by pressure to perform well in the pool after the attention she received in the run-up to London 2012.
“At big competitions I always get really nervous,” she says. “Everyone expects me to get medals. But the pressure drives me forward. I love doing it, it is my life as well as a sport.
“I get recognised quite a bit,” she laughs. “People say hi or know who I am, but I think I have got used to it now and it is not all the time.
“It was a bit weird at first after Beijing,” adss Ellie, who was just 13 when she went to the 2008 Paralympic Games. “But you do not really think about it when you are younger.”

Ellie at the 2012 BBC Sports Personality of the Year Awards REX FEATURES
Despite her love of swimming, and her time in halls being dampened by her lack of phone signal, she enjoys the company it brings.
“I like being with my friends,” she says. “When I am not swimming and have time to relax I go shopping, I go to the cinema, I like hanging out and I have pyjama days.”
She hesitates at what her life would be like if she had not become an athlete. “I think I would just be normal,” she says.
“I would probably still do sport because I like to be active, but I would probably just be doing what people my age are doing, at university.”
With her swimming commitments, being able to fit in university would be a luxury for Ellie, one that she worries she may not get.
“I have been doing my A Levels for three years now, it is taking quite a long time,” she says.
“My biggest fear is probably not getting a place on the team for an international competition, but also that a degree would take years and years to achieve.”
Ellie is currently training for the 2014 Swimming European Championships held in the Netherlands.
2014-08-28
admin