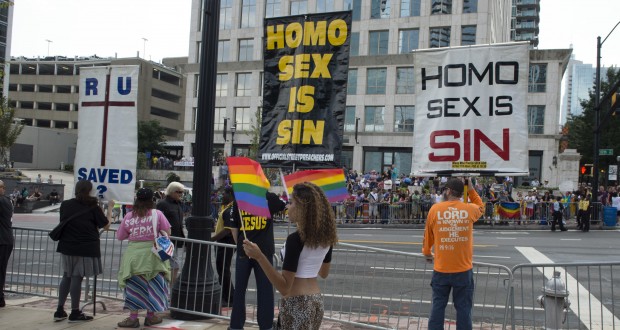 Homophobia: beating up the whole community

Written by Bauke Schram on December 5 2014

‘But you don’t look like a lesbian. I would have never thought you were gay. Like, I’m totally fine with it, but I would not have guessed. Maybe you have not dated the right guy yet.’

It is another night in a pub or club, and somehow my sexuality has come up. Maybe a guy aggressively made a move on me, maybe some girl started talking about sexuality, and I told her I am into girls.

Most people say they are ‘fine’ with ‘it’ (phew, so happy I have your blessing), and I have barely experienced any homophobic behaviour since I came out of the closet two years ago. The annoying behaviour of some slightly intoxicated people is the worst I have experienced regarding my girl-liking.

But when two young men ended up bruised and broken in the hospital after a homophobic attack in Kingston, it hit quite close to home. Though I have never experienced homophobia so directly or violently, incidents like this are a reminder that many people still see ‘being gay’ as the worst thing someone can do.

While the daily horrors that gay people experience in Uganda and other parts in the world are something we think about and get confronted with, these incidents feel very distant and unreal, in a sense. A homophobic attack in Surbiton, mere miles from where I eat, sleep and fall in love – living with a misleading feeling of safety and security – actually scares me.

My friend and KU graduate Ellie looks more like what people think a gay woman generally looks like. Sporting her short hair, lip ring and her love for flannel shirts, she has been confronted with homophobia multiple times. “I saw a guy on the train once text his friend ‘uggh a dirty lesbian just sat next to me,’ to which his friend responded with ‘quick, move’. It was ridiculous to judge me for my gender expression, and he just assumed I was gay because of my looks.”

Ellie’s story is worryingly common, especially since we live in London in the 21st century. That being sad, I  still hear stories from people back home in the Netherlands experiencing ignorant behaviour and nasty comments and over there, gay marriage has been legal for more than 13 years.

It seems queer people are mostly judged for their gender expression. Luckily, we have come a long way since times when being gay was considered an abomination, but homophobic attacks, homophobic comments from various religious leaders and, most of all, Fox News, can make us feel bad just because of our sexuality. Homphobic attacks in today’s London are quite rare, luckily, but they still occur, not only beating up the direct victims, but hurting an entire community.