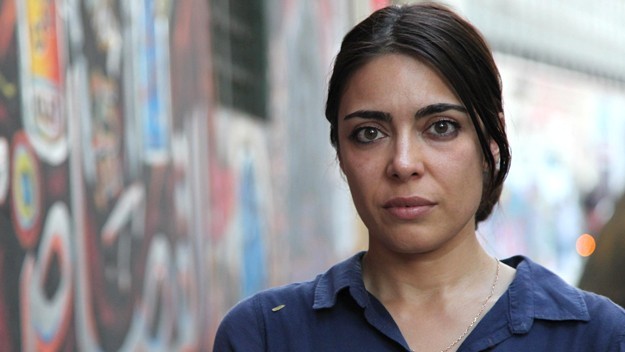 ‘Before being a journalist, I am a human being’

Channel 4 reporter Ramita Navai visited Kingston University last week and addressed a roomful of aspiring journalists, human rights campaigners and fashionistas, some hoping that one day they themselves would have an audience eager to hear about their exciting lives as foreign correspondents.

Navai, originally from Iran, had her work recognised by the mainstream world as a renowned foreign correspondent mainly after her work for Channel4’s foreign series Unreported World, where she has filmed 20 episodes in the field. Her undercover report from Syria in 2011, based on two weeks she spent living alongside the opposition movement against President Bashar al-Assad, won her an EMMY and extensive recognition.

When she flew to Iran after her post-graduate from City University, she faced a career changing moment.

“I was broke, I knew the language and I did not have to pay rent,” she said. “I saw that there was a gap in the market, as there was not much reporting happening from Iran, and then I faced something that got me my first job.”

When in 2003 the Iranian south-eastern province of Bam was struck by a fatal earthquake, killing over 26.000 people, Navai phoned the Sunday Times to offer coverage for the catastrophe.

“At that time, my lecturer’s words at City popped into my head and I think it was the most valuable tip I had been given, which I now give to you all – he said when people are in need of help, they need to talk; they realise the power that you have to help.”

After that, she became the Tehran correspondent for the Sunday Times. It was not long until she began covering most of the Middle East.

From what she has experienced, Navai thinks it is important to establish a human connection with the people who are being interviewed before expecting them to just say everything you want for the camera.

Navai made it clear that her humanity comes forward before anything else. “I am not the journalist that just does the story and thinks the story is the greater good.

“I will be bloody thorough in knowing that I am making the right decision,” she said, admitting she would help any person in need if she knew that was the right thing.

“Every case is different, and there are a lot of things to consider. But above all, I am Ramita first and I do not want to represent a corporate company, I represent me.”

Knowing the language definitely helps, and you will learn that some cultures are generally more open to talk than others. In Latin America, people are socially open and love to talk. But in the Middle East it is more difficult for Western male correspondents to speak to women,for example.

“Being a woman has definitely helped me more than it has put me back. I have access to half of the population that men don’t.”

However, Navai acknowledged that there is a tendency to give women softer stories.

“The tougher stories tend to be given to men and if I want those stories I have to fight for them.

Working in print feels a bit purer, she said. Apart from the irrelevance of the looks, there is more freedom with each story. In broadcast, a story about Afghanistan will not be run, no matter how brilliant it is, if the channel has already broadcasted stories about that country in previous days.

Being a freelance is no easy way of life, and passion should be any journalist’s drive. There are no millionaire wages, except for news anchors, which Navai made clear she did not want to achieve. It is not a constant source of money, and the search for stories never ends. It will be tough, but if the heart is in the right place when chosing this profession, no wages can pay the feeling of achievement that one can have.

Here are some of her tips:

A freelance journalist needs an area of expertise. Specialising in one area of the globe or one particular subject will help find a job, particularly when there is knowledge of a language or access to a community that no one else has. a specialist has more chances finding what stories are not being covered.

News publications are desperate for stories – if the story is new and interesting, they will want it. However, starting freelancers may feel a bit exploited at first and will definitely be underpaid.

After finding a specialisation, a journalist needs experience. Nothing better than internships and work experience. Most of them will not be paid, but can be a great way to make contacts or even get a job.

There is some bursariesavailable for reporting abroad, so a good idea does not have to die because of lack of funding.Mediacal courses are vital too. Knowing emergency aid techniques is an essential skill.

A story is only as good the the fixer. Local journalists know the are better than anyone else.

Back up all you data

Unexpected situations can happen at any point. The equipment may get lost, damaged, stolen or confiscated.

A journalist, before being so, is a human being. No story is more important than a life and all decisions need to be balanced. Sometimes,  journalists can face situations where they want to help. It is got to be clear if that is the right thing to do.