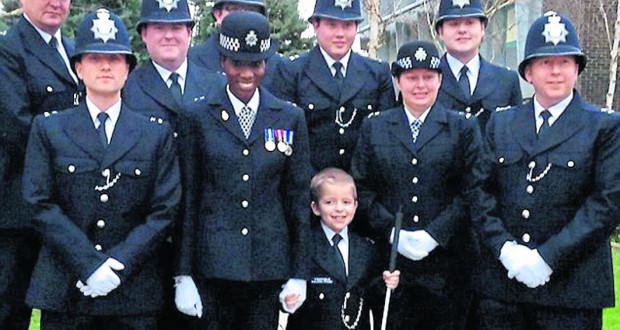 Written by Elizabeth Stromme on January 23 2015

The Metropolitan Police have made a dying seven-year-old’s dream come true by making him Kingston’s youngest ever recruit.

Malachi Tyler, who suffers from an incurable brain tumour, has always wanted to become an officer of the law.

On Friday, January 9, Malachi’s wish came true as he joined 197 new police recruits to symbolically complete the Metropolitan Police training, by participating in a passing out parade.

The seven-year-old was the guest of honour at the parade and he was issued an award in recognition of his attendance.

Glenn Tunstall, the Kingston Borough Commander, said: “It is a real honour for me to introduce the youngest of our recruits on parade today – to his family he is Malachi Tyler, but to us he is PC 999VK Tyler of Kingston Police Station.

“He won the hearts of every member of staff – his positivity, his cheekiness, the constant giggles and ultimately his courage in the face of adversity humbled us all. In the Met one of our values is courage – which is epitomised by this little boy and his family.

He added: “We have adopted Malachi as part of the police family, a family that now stretches across London and across national and international boundaries.”