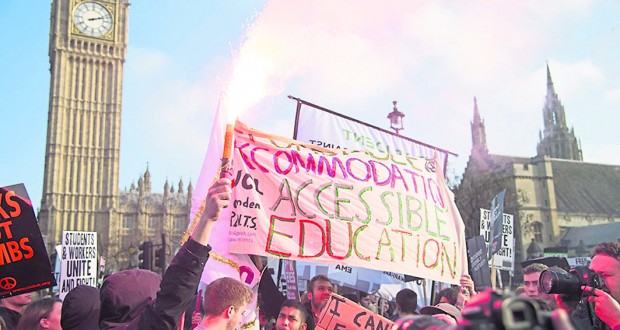 How to: get involved with politics for young people

A tweet saying: “My sister won’t vote because Harry Potter is on the TV” during the 2014 local elections went viral last year as it is symbolic for people our age with the older generations criticising us for our political disengagement, our obsession for social media, and our desire to finally receive that Hogwarts letter.

The reason that we- the generation graduating from university in a time of austerity, a horrendous job market, and unbelievable international tensions- are suffering from political disengagement has more to do with the lack of representation we feel than our disinterest in politics.

A Nottingham Trent University survey showed that around one third of young people do not trust politicians and feel like they do not care about young voters.

Voting is not the only way to get involved with politics though. Here are some other ways you can exercise your democracy, if voting is just not enough.

If you are so keen on practising your democracy and you do not care about getting cold, tired, or deaf, you can go out and join protests.

In London, thousands of protests, demos and rallies are organised all the time. In June 2014, tens of thousands of people went out to protest austerity, and in November, students made the front pages with a massive demo for free education.

Richard Donnelly, a KU critical theory student, is a member of the Socialist Workers Party, and has participated in his share of protests.

“Protest is the real face of democracy,” Donnelly said. “If students are beginning to go to their first demonstrations, they should think about joining a revolutionary group.”

Donnelly thinks that people should make use of their right to protest as Parliament is too elitist.

“When thousands of ordinary people come together they can get a sense of their own power and see that it’s not just the media, politicians, and bankers who have the whole situation under their control.”

It might seem that petition websites are spamming your inbox after you have signed one petition. However, gathering attention and flagging issues to people in power through setting up and signing petitions has proven to be a very effective way of changing policies.

Meltem Avcil, a former KU student who also was an asylum seeker, started a petition to stop female asylum seekers from being imprisoned in Yarl’s Wood detention centre after she was sent there herself at the age of 13.

“To me, the petition was very personal,” Avcil said. “I went through those things; I had been detained, so I knew what it is all about.

The petition got featured by Change.Org and has over 50,000 signatures which sparked the online campaign #SetHerFree and helped her receive the Christine Jackson Young Person Award for her work as a campaigner.

Avcil said: “Ridiculous as it might sound; I think students should start a petition for anything and everything that doesn’t make sense to them.

“If someone would want their petition to be successful, they should work for this change and they have to be dedicated to the task.”

Students can start a petition for national or international change at Change.org or they can use ePetition for Kingston Council or any local council.

There are officially only two conditions for anyone who wants to stand for election. Firstly, you must be a British, EU or Commonwealth citizen and secondly, you must be over 18.

Politicians are always looking for assistants and researchers too. Additionally, students can get involved with politicians and other types of political organisations quite easily by looking on www.w4mpjobs.org

Writing and reading political blogs are other ways students and young people can get involved with politics.

Sunny Hundal, a part-time KU lecturer, was voted Guardian blogger of the year in 2006 after he started blogging about race relations and Muslim communities in the UK.

“The first rule of political blogging is always to pick an issue you are interested in, that you already know something about, and that you can bring some perspective to,” Hundal said.

Hundal explained that bloggers often form communities. Whether it is fitness blogging or international political blogging, bloggers who write about the same topic refer to each other and read each other’s content.

“Political blogging confronts politicians in a sense,” Hundal explains. “Political journalists cover what politicians say, but bloggers tend to hold them accountable and talk about the things politicians have said that concerns their readers.”

Voting for politicians to represent you in Westminster is still an important way to have your say in the country and it is certainly an important thing to do.

However, if you are discontented with what your elected MPs do you can always look into alternative ways to have your say. Just make sure you are wearing a warm coat when marching the street – unless you are protesting climate change.

Election Day will be on 7 May 2015 so make sure you register to vote on https://www.gov.uk/register-to-vote