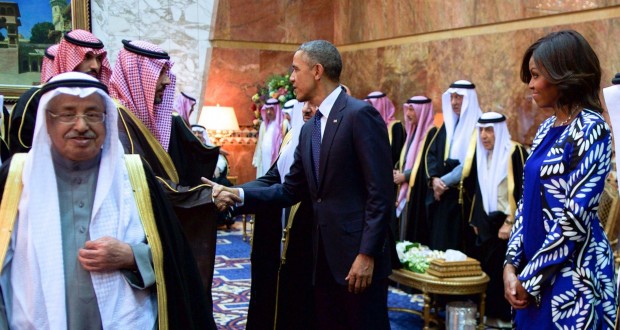 Written by Fran Warburton on February 3 2015

As one of the world’s most watched women, the First Lady’s wardrobe is no stranger to scrutiny, however during her visit to Saudi Arabia, it was what she didn’t wear that spawned a media frenzy.

Yes, Mrs Obama’s decision to bare her immaculate hair as she accompanied her husband in the desert Kingdom to pay respects to the late King Abdullah attracted world wide attention – however my question is why? Cultural respect should not equate with abiding by the same norms of dress.

Of course the First Lady’s political statement caused a small stirring amongst the Arab twittersphere.  Obama predictably received attack on Twitter, with both English and Arabic speaking users deeming her ‘inappropriate’ and ‘disrespectful’. Hashtags translating to  “Michelle_Obama_immodest” and “michelle_obama_notveilied”, spawned over 2,500 tweets.

Since Saudi Arabia has a large social media following, however, these numbers are hardly controversial. According to BBC Monitoring, who were tracking criticism of Michelle Obama, only 37 per cent of tweets using the hashtag even came from Saudi Arabia, and most that did were positive. What’s more the First Lady’s uncovered hair did not disrupt diplomacy as she was still greeted by Saudi officials, although all-be-it, she received a nod over a hand shake by a few.

The rights of Saudi women are heavily restricted; as well as being forbidden to appear in public without their heads covered, women face laws restricting their independent free movement and their ability to drive a car.  Obama’s decision to not abide by the political dress code was bound to cause a back lash – the so called ‘outrage’ of Saudis was widely exaggerated in British headlines.

What’s more, whilst a strict, ultraconservative dress code is obligatory for Saudi women, the law does not extend to Western visitors. Mrs Obama is not without precedent; First Lady Bush, Hillary Clinton and Chancellor Merkel have all previously gone un-scarfed in the Kingdom.

There is no doubt that Mrs Obama’s decision to forgo a headscarf was a bold political statement against the country’s restrictive rights for women, however it was one to be expected.  Especially since the Obamas cut short an address in India, where the President had addressed the importance of women’s rights, in order to pay their condolensces in Saudi Arabia.

The media attention Michelle Obama’s hair received was little deserved. True, she may not have been wearing a nijab (traditional Saudi dress) – yet she wasn’t required to and instead her outfit was perfectly modest, unoffending and most of all unsurprising. It can be certain that no matter what her outfit choice, Mrs Obama’s wardrobe would have faced wide spread speculation either way.

As a result, the First Lady’s hair drew attention away from more pressing issues regarding whether the US and UK should remain allies with the politically controversial country.

What can be understood from the western media coverage of Michelle Obama’s attire is this: religious dress for women has become a symbol of oppression. In country’s like Saudi Arabia it is law for a woman to cover her hair and body, however you have to respect that many women across the globe choose to.  Women should be allowed to wear what ever they want – if Michelle Obama does not want to wear a head scarf, it does not mean she aims to cause disrespect. More so, if a Muslim woman chooses to follow a religious dress code, it does not entail that her rights are being oppressed.

The River Newspaper journalists Priyanka Mogul and Dani Schram celebrated World Hijab Day by challenging you to cover up for a day before you judge.