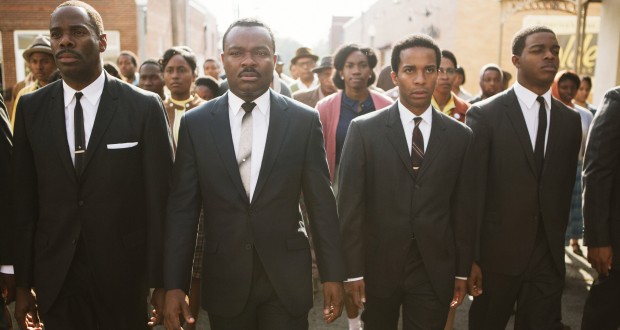 Written by Bauke Schram on February 6 2015

Though the flower prints and fedoras make it clear that Selma, directed by Ava DuVernay, is set in the 1960s Alabama, the issues the film deals with are unfortunately ongoing.

It was in Selma, where the majority of the population was black, where a march to demand equal voting rights started, shortly after Martin Luther King’s ‘I have a dream’ speech.

The march succeeded in making the Government pass the Voting Rights Act which marked a key event in American history, but the details of the story hit close to home in the 21st Century.

Police brutality towards blacks, racial segregation and government surveillance were pictured without mercy in Selma, confronting us with a dark past and a future that might look less bright than we think when it comes to civil rights.

David Oyelowo portrays a realistic Martin Luther King as a natural leader, using a calming yet powerful voice and making the somewhat slow dialogue exciting to listen to.

Despite the fact that there are moments of serious disagreement, a lack of unity within the group of civil rights activists and writer Paul Webb even flirting with the accusations of MLK’s adultery, the movement and the struggles of the people are almostromanticised in the 127 minute long film.

Instead of staying true to the confrontational images of blacks ignored by society, the film shows well-dressed, sophisticated protesters marching in sunlight. The accounts of violence, however, are very real, loud and confronting.

Apart from the ‘white hero’ image created for James Reeb (played by Jeremy Strong) and other white protesters who came from all over the USA, the story is painfully honest when it comes to hill billies, the relaxed use of the N-word and the institutional racism of the 60s.

Historians have criticised the film for ‘inaccurately portraying’ the relationship between Lyndon Baines Johnson and MLK as hostile, but it is naïve to think that their conversations in times of tensions were always jolly and cheerful.

But taking White House propaganda into account, DuVernay and Webb hit the nail on the head with portraying a reluctant and image-focused LBJ.

And while Tom Wilkinson makes a believable LBJ, it is very obvious that kick-ass, police-punching Oprah Winfrey upstaged the white actor by her great performance as Annie Lee Cooper.

I suspect it was the current climate we live in that made the telling of the Selma to Montgomery march soft around the edges, which only showcases the importance of the event, and the attention for its recreation on the big screen.