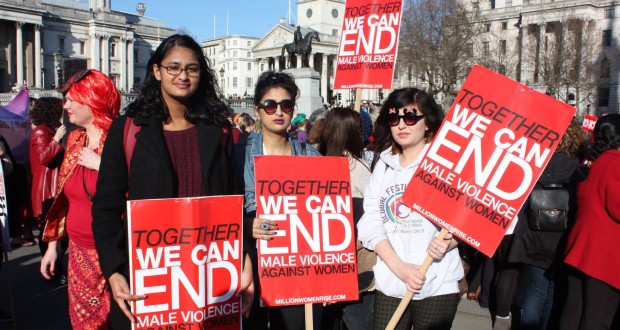 The KU feminism society participated in the annual Million Women Rise march in London on March 7, demonstrating against male violence.

Hundreds of women walked together from Duke Street, via Oxford Street to Trafalgar Square, singing messages like“What do we want? Safe streets! When do we want it? Now!” and “Women’s bodies are not for sale, and we won’t be for sale anymore”.

The march bonded women from across the UK from different backgrounds and organisations.

Women’s Officer for National Union of Students London and KU student Elaha Walizadeh said: “I think it shows unity and togetherness. I love the fact that women come together and show their views on gender-based violence.”

“So it is important to condemned violence against women and obviously show that we are united and that we shouldn’t keep quiet.”

Nadie Jayatissa, President of the Feminism Society explained why she believes International Women’s Day is important:  “A lot of people in western countries seem to think that sexism is over. I disagree, specially for people in less fortunate areas of the world, so I think International Women’s Day is a good way to bring it to the forefront of minds and remind everyone that there is still a lot of issues going on, but also to celebrate what we have so far. We have come along way, but there is still a lot to do.”

Feminism is a big part of the march and has been a growing topic lately with a lot of celebrities, like Emma Watson and Taylor Swift speaking up about gender inequality.

Jayatissa explained:” I think that there needs to be a lot of education about what feminism is. I think some people don’t realise it but it is really important to everyone, it effects all different kinds of people, not just women,” she continued, “The march is sort of the way of getting everyone feeling that they can make a difference.”

According to Walizadeh, even with a few Kingston students who attended the march it has been improving compared to previous years.

“Couple of years ago we didn’t even have a feminist society, but now we do. It is really active and I think activism in women’s rights is finding a way into Kingston now, so it is improving,” she said. 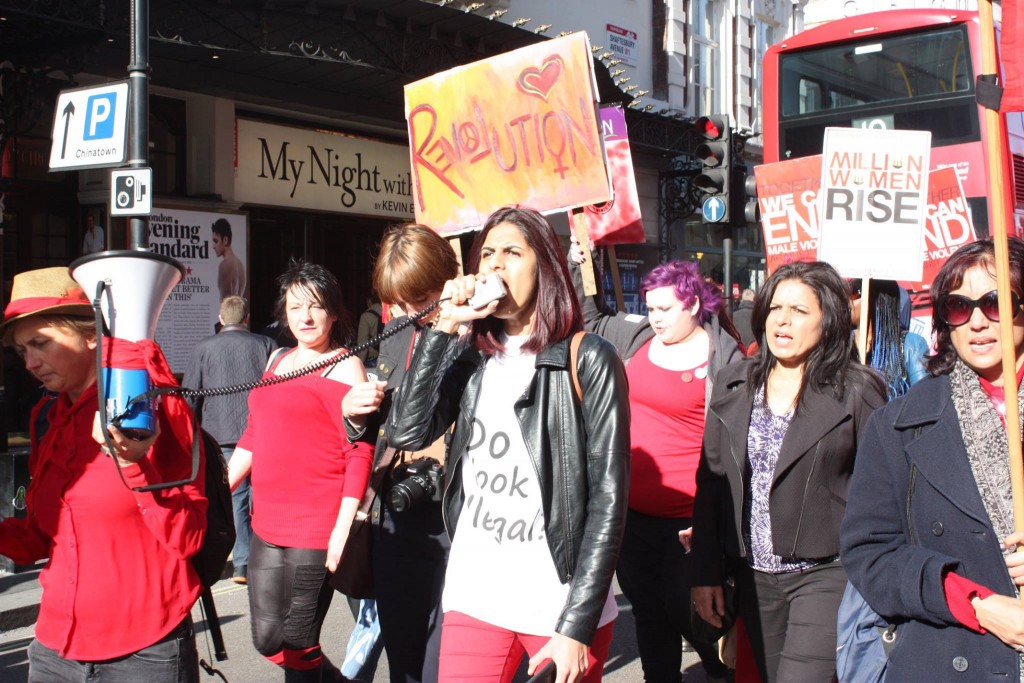 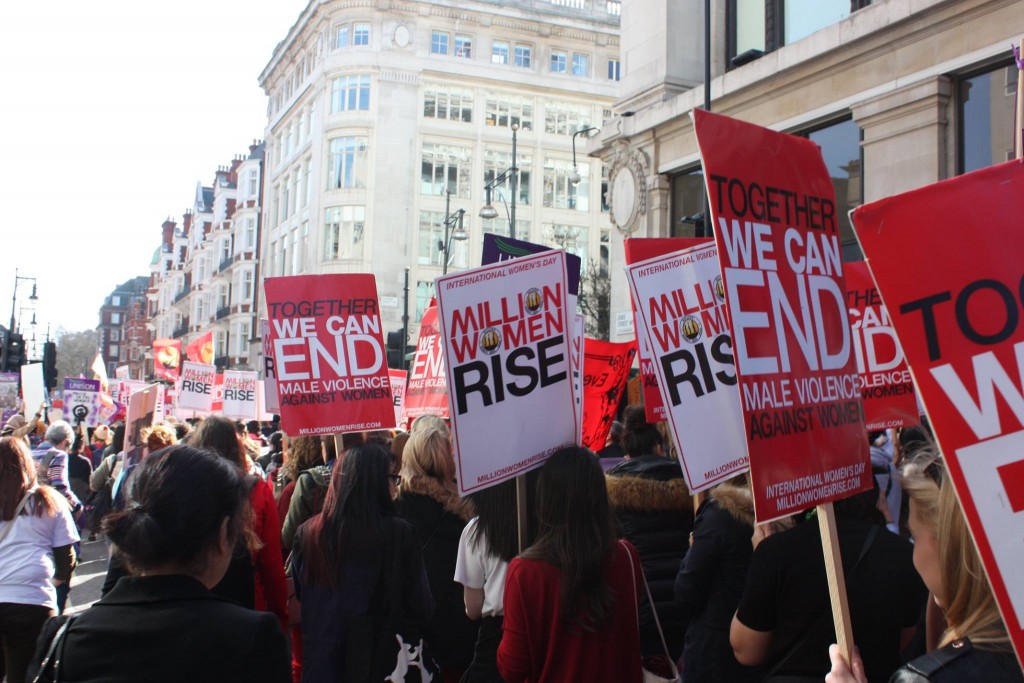 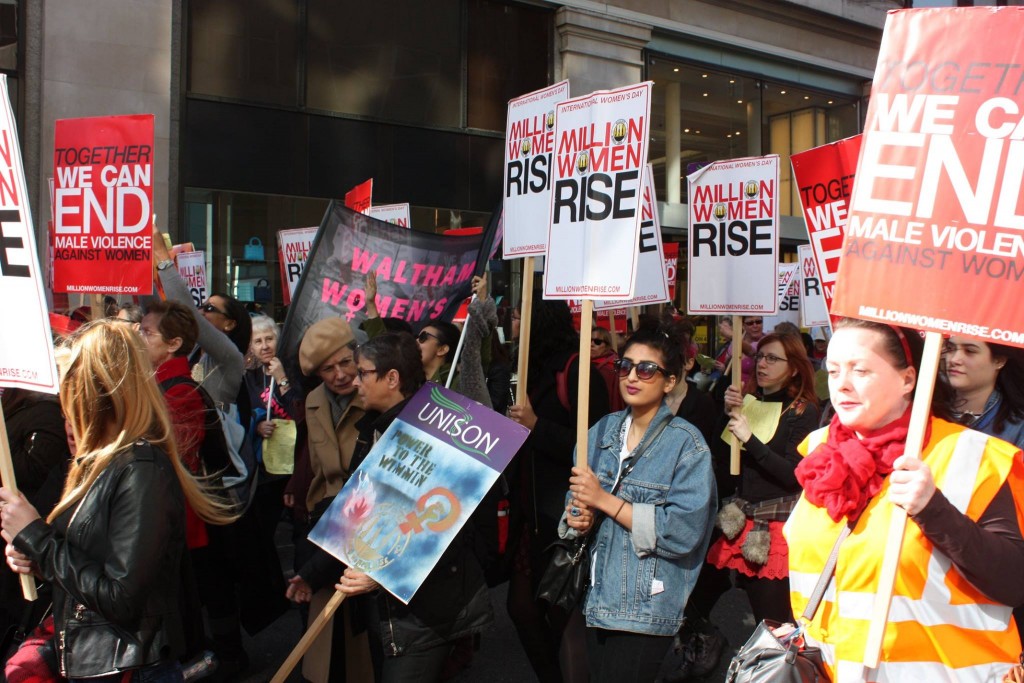 “What do we want? Safe streets! When do we want it? Now!” Photo: Abigail Ward 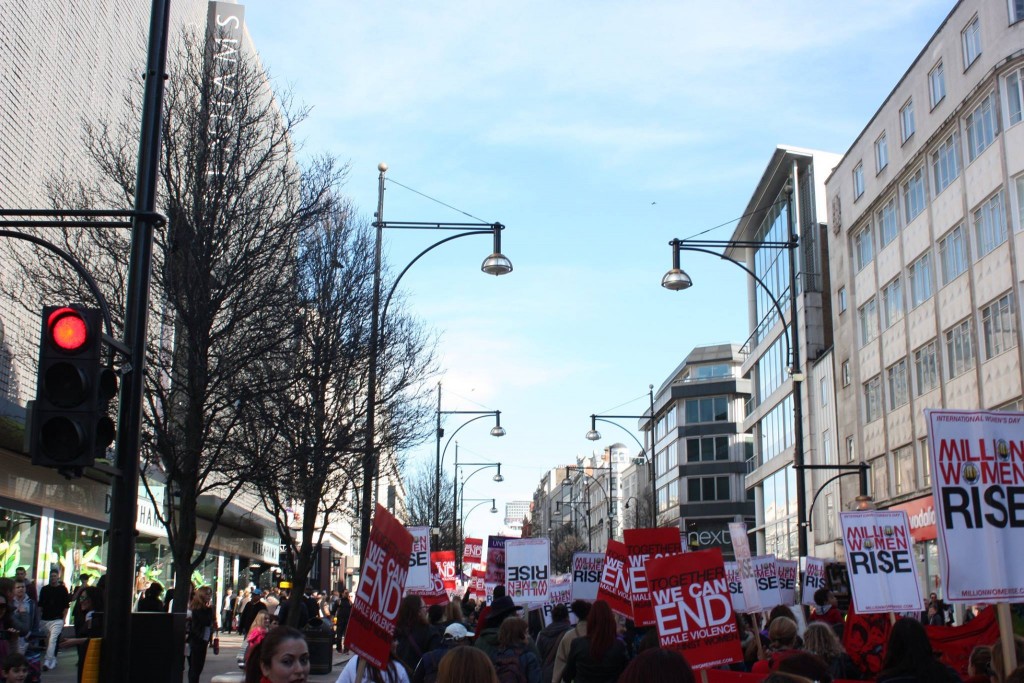 “Women’s bodies are not for sale, and we won’t be for sale anymore.” Photo: Abigail Ward 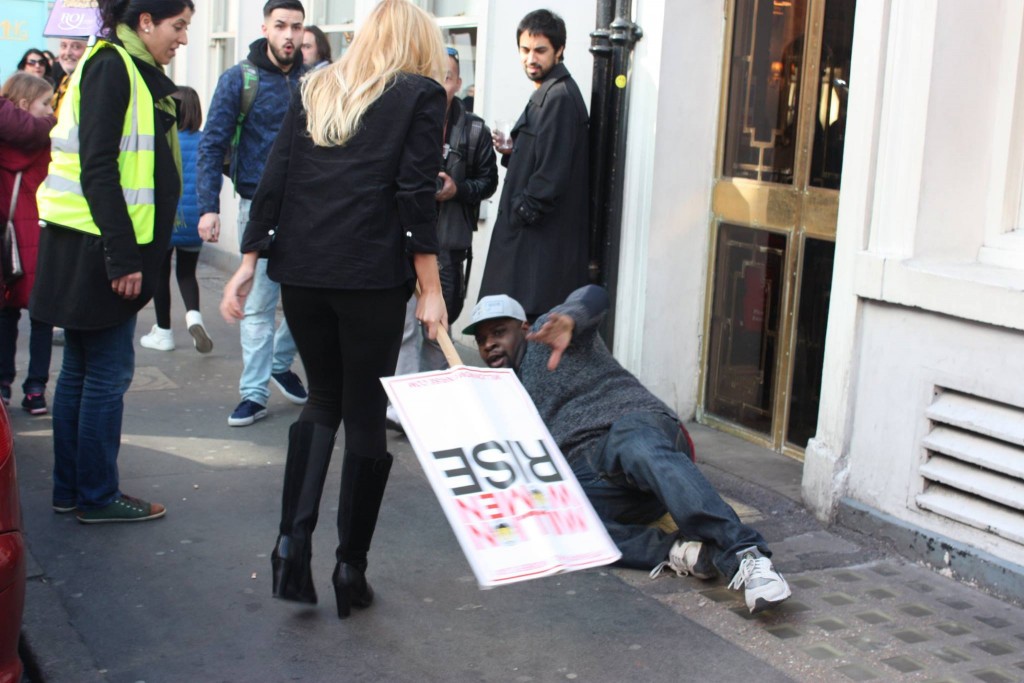 Misunderstanding between demonstrator and passer-by. According to the volunteers it was a stunt for attention. Photo: Abigail Ward 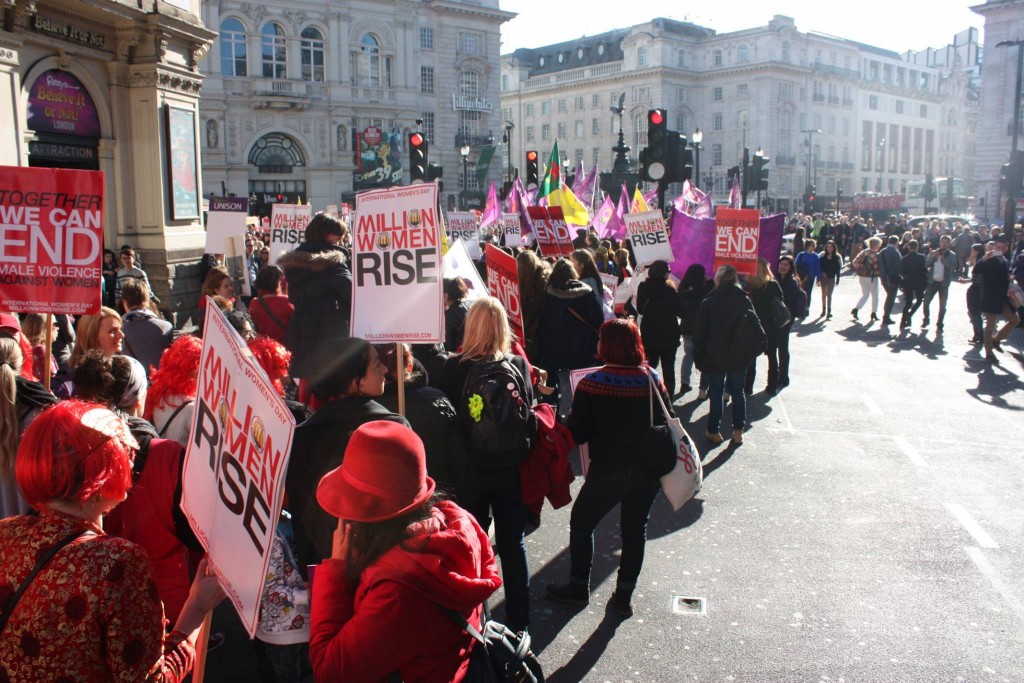 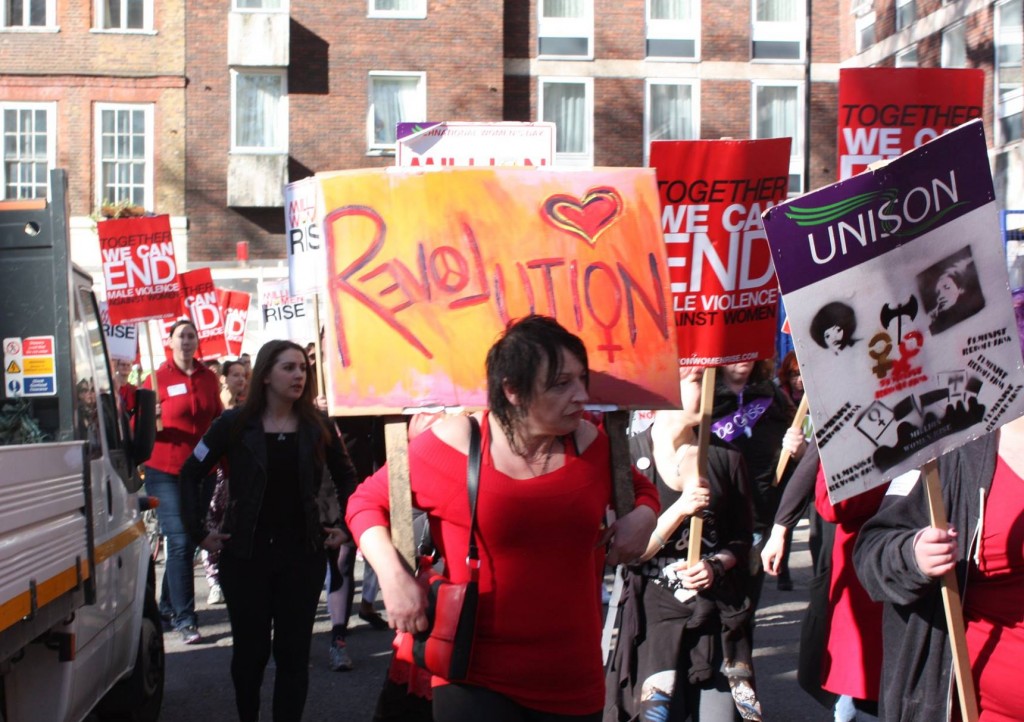 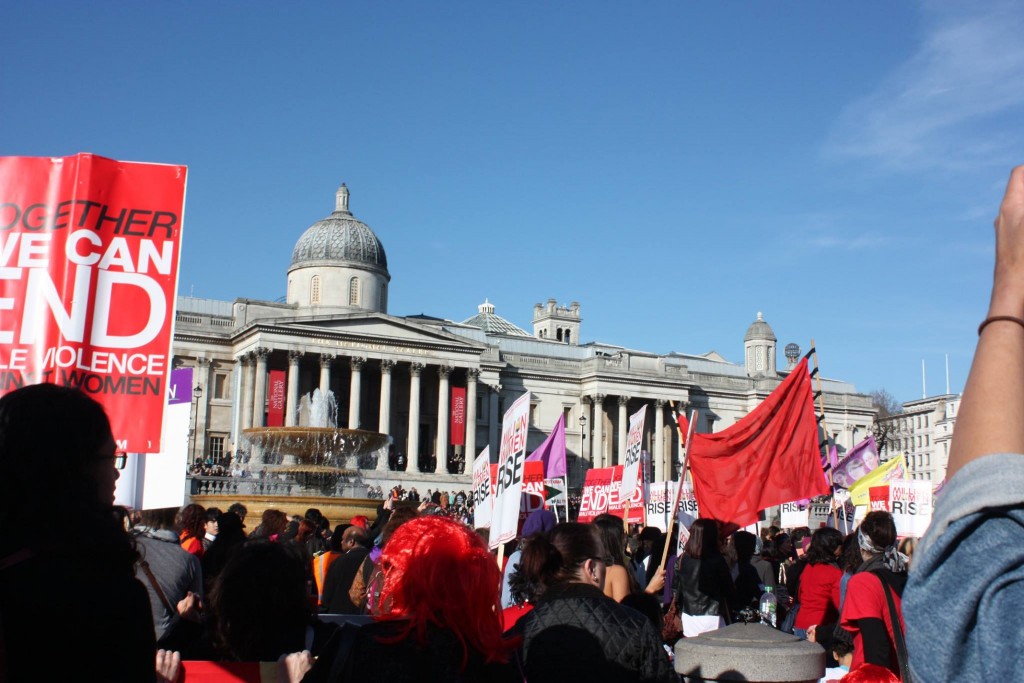 Trafalgar Square, the final destination of the march where speeches and music was held. Photo: Abigail Ward 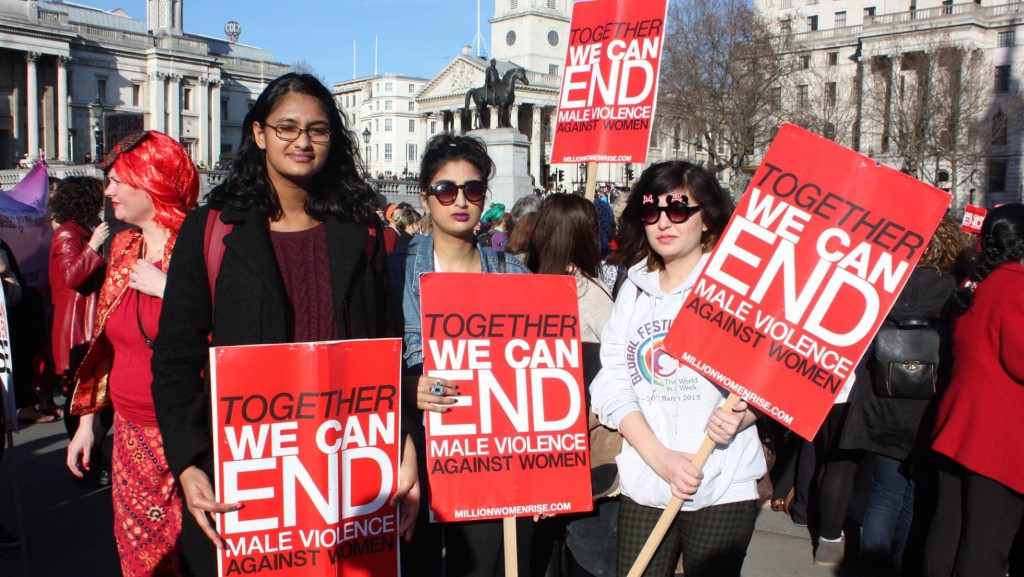