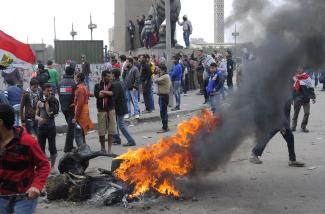 Amer Labania, 33, had a summer to remember – for all the wrong reasons.
Anticipating a peaceful summer, the Syrian-born economics student travelled to Egypt in an attempt to free his wife, Alaa, from the visa restrictions that separated them.
Every day Amer had no choice but to queue outside the Syrian embassy under Cairo’s scorching sun among rowdy crowds of people.
“We were really in a mess and we didn’t know what to do,” Amer says. “My number was 268 and I knew that I wouldn’t make it during that day.”
Amer returned the next day before opening time, only to find his worst nightmare had become reality.
“Suddenly, there was a security alert and the embassy shut down,” he says. “They opened fire at Al-Nahda square at protestors and the entire city of Cairo was gridlocked.”
Stuck in a foreign city without help, Amer was subjected to extortions, corruption and blackmail, costing him £300.
Two months of stress and struggle got Amer and his wife nowhere. She is still waiting alone in Egypt while he spends his time meeting with lawyers.
To escape from Syria to Egypt, Alaa had to travel through Bustan-al-Qasr, a road controlled by the Syrian government. Amer described it as a “death passage”, where people are forced to run for their lives or they will be shot by snipers.
“When she was running, a bullet was shot and it went through the wall,” he recalls. “It missed her by a metre. A lady running next to her just fell, dead or injured.”
Amer is from Aleppo. It has been three years since he left his children there and two years since he last saw them. Still, he strides through his days with patience, saying that breaking down is not the solution to his difficulties.
Tearfully, he says: “I go through a lot of stress and depression. I keep smiling as I have to keep going.”
Weeks pass with Amer not knowing whether he’ll speak to his family again.
Families in Syria are continuously living in fear, desperately hoping for some stability in their lives. In a battle in which there’s neither victory nor defeat, it is innocent Syrians who pay the heavy price.
Amer considers himself to be one of the lucky ones. Though torn apart from his family, he feels blessed that they are still alive.
“Having had a glimpse of their problems in Egypt, I don’t know how they go through that every day,” he says.
Meanwhile, in Egypt, sexual harassment has become an epidemic. Amer says that his wife is affected on a daily basis.
“I know she’s not safe,” he adds. The word ‘normal’ does not exist for Syrians like Amer anymore. Emotional turmoil and distress are understatements when describing the student’s situation.
Life for Amer hasn’t been easy, but he strives to work hard and support his family, in the hope that one day they can be happy again.
‘We don’t know how it is to be in a warzone’
Ali Mourad, a third-year financial economics student, travelled to Egypt in the summer, unaware of the events to come. From having his friend shot, to growing accustomed to curfews and attacks, Ali’s holiday turned out to be a turbulent one.
During Ramadan, Ali was enjoying the breaking of fast with friends. Little did he know what was about to happen.
“After we left, two black jeeps suddenly followed my friend’s car, trying to get them to stop,” he says. “The men inside the jeeps took out their guns and started shooting.”
One of the men tragically died at the scene, while the other two were rushed to hospital in critical condition.
“We live in a bubble in England so we don’t know how it is to be in a warzone, to have your friends and family die right in front of you,” he says.
The 21-year-old says that the presence of army tanks had become the norm in Cairo. Ali also speaks about Egypt’s secret police, which is known for doing the government’s ‘dirty work’ during the revolutions and protests.
“They come into your house, they take you, and you disappear, nobody knows where you are,” Ali says. “The real reason we had a revolution is now gone. We are back to where we were.”
The problems in Egypt spring from the first revolution, which began January 25 2011, in Tahrir Square. During this time, there were concerns about people’s safety.
President Mohamed Morsi was ousted, having failed to tackle the political turmoil in Egypt.
Accused of manipulating the position of president for his own personal gain, Morsi failed to resolve the reasons behind the revolution.
With various political groups now at large, clashes have erupted and the country cannot stabilise itself.
The horrors of Syria and the clashes in Egypt may seem remote to us, but for students like Ali and Amer, it is their reality.