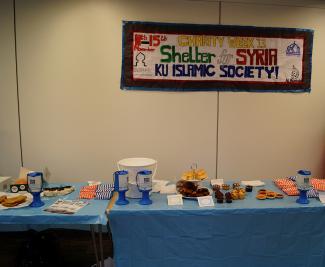 The Islamic Society is fundraising on campus this week to help build a village for the refugees affected by Syria’s civil war.

The society, which raised £12,000 last year for children suffering from heart disease in Africa, is working alongside the Al Muntada trust for the project.

President of ISOC, Omar Malik, said: “Up to 2.5 million people have been displaced from their homes and this project looks to provide shelter for those refugees.

The society has been collecting donations on all five campuses and has held a number of different events including a cake sale, a film screening, an international food stall and a football tournament at Tolworth sport grounds.

The main event, a dinner and auction called, A Night for Syria, is being filmed and presented by the TV channel Muslim World Network.

“We hope the auction will raise plenty of money and on Friday to finish off we are having a quiz night … It’s a busy week,”  Malik said.