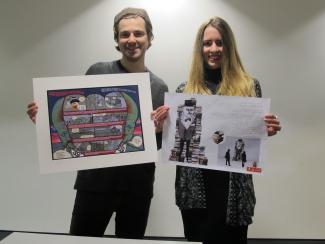 Their creations qualified them to be amongst eight candidates for the 2013 Pentland Winston Churchill Design Award.

Carl Hoare, 32, who graduated from Kingston University in 2011, won second place in the competition.

The competition invited UK students and graduates to create an inspiring piece of artwork that captured the spirit of Churchill and encapsulated his relevance to the contemporary scene in the UK today.

Students were able to portray their 2D work through graphic design, textile, painting or any other artistic medium.

A man to remember

Hoare’s piece, The Extraordinary Tale of Young Sir Winston, depicts Churchill when he was in South Africa during the Boer War in 1899.

Hoare simplified the famous phase in the statesman’s life, where he was captured by Boer forces and taken to prison.

Organisers of the competition, the Pentland Group, were so impressed with Hoare’s work that they decided to offer him a paid internship in February.

Her work,Winston Churchill – The Journalist, Writer and Thinker, is a sculpture of books with Churchill painted on them with acrylics.

She said: “I decided to use books because I thought that his life was built around them. I also wanted to show how we know about him – it is literally through books.”

Tschirky concentrated mostly on Churchill’s iconic outfit as we know it: the hat, the bowtie, the suit and of course, the cigar.