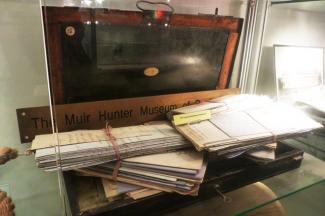 Kingston University is to become a leading destination for legal researchers after the Institute of Chartered Accountants in England and Wales (ICAEW) donated £5,000 to digitise a historical archive.
The archive, which was described as a goldmine of information on the subject of insolvency is said to be a key component to understanding the issue in its historical context and how policy might develop.
An invaluable archive
Insolvency expert Dr John Tribe, who runs the University’s Muir Hunter Museum of Bankruptcy, said: “It’s an invaluable archive and it means Kingston will become the seat of the history of bankruptcy and insolvency.
“Even the leading insolvency chambers in the country, Three Four South Square, where Muir used to work don’t have the kind of material that we’ve been fortunate enough to acquire.”
Dr Tribe said that although the documents were historical, the way they shed new light on the formation of legislation currently in use meant that they were of huge contemporary relevance.
Support from top experts
“We’ve already had statements of support from top experts such as Professor Ian Fletcher at University College London and David Milman of Lancaster,” he added. “These people are fully behind it because this tranche of documents will prove invaluable for their research too. What we’re able to do here is good for the discipline as a whole.”
The funding boost from ICAEW was welcomed after discovering what information the archive contained. “There’s years of work to be done here – whoever comes after me will probably still be chipping away at it in 50 years’ time,” he said.
Dr Tribe said two PhD students are currently working on it to digitise it. “So far over the course of the last year we’ve managed to digitise about a third of it,” he said.
Great for scholars
Dr Tribe said that several donations have been made to the important work being carried out concerning the archive. “It’s a very slow process but what we’ve managed to compile so far is great for scholars.”
With work well under way, Dr Tribe said that he was happy to share the archive in a drip feed fashion, rather than wait for the whole collection to be catalogued.
“I want people to be able to use it straight away,” he added. “Even though it’s all historical material, it’s relevant now and is going to make Kingston really prominent in this field because anyone interested in reforming insolvency law in the future will need to access our archive here at Kingston.”
ICAEW director Bob Pinder, who specialises in the field, said the said the Institute was happy to contribute to further awareness of the topic. “This archive will help us learn more about the underlying rationale behind the Insolvency Act 1986,” he said.