You might have been told that you could meet the elusive “one” when you set off to university. Maybe it was used as a tool to warn you off starting university in a pre-existing relationship or maybe there was actually some truth in it.

You are, of course, surrounded by like-minded people of similar ages who share an educational background and interest in the same subject. Take Kate Middleton and Prince William, for example, who met and fell in love at the University of St Andrews in Scotland in 2001.

Much closer to home (and a bit less aristocratic), are the couples who met within the very walls of KU and are continuing to maintain these relationships to this day.

KU graduate Louise Mountain described how she met her husband, Sam, while both studying Fine Art: “I didn’t like him at first because I thought he was pretentious, but we ended up having our first kiss at the end of second year, after a group trip to Wetherspoons in Surbiton.

“No one thought we would last as he left for Erasmus pretty shortly afterwards, but we ended up getting married the next year in our summer holidays and invited all of our KU friends. Now, we’re still happily married with a toddler, who loves art just as much as we do.”

Partners in life and love

Another story of KU romantic success is that of Frankie Price and Tom Pilling, who studied Graphic Design together.

“I remember the first time I met Tom. He was, in a word, terrifying. He was loud and drunk to the point that I can’t repeat what he actually shouted as he strolled through the uni accommodation door,” Price said.

“After walking me home that night to my own halls, which was an hour walk away, I distinctly remember saying goodbye to this complete stranger thinking I’d never see him again.”

She continued: “The next day, I strolled into uni on the first day of my graphic design course, looked around the room of new faces, and who did I see? A (thankfully) sober Tom Pilling clocking me from across the room.”

The pair remained friends until the start of their second year, when they started to pursue a romantic relationship. Having recently bought their first home in Kingston together, the couple plan to one day hopefully start their own Creative Studio business. 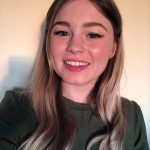 One thought on “The Fairytales of Kingston”