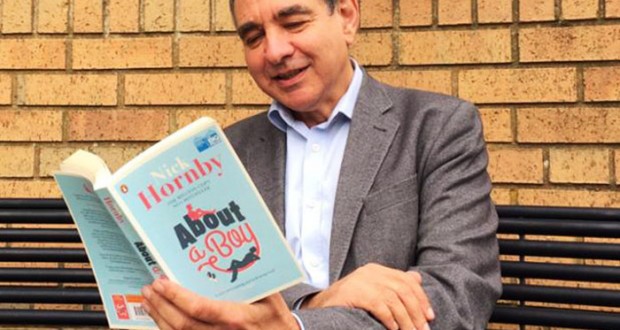 VC Julius Weinberg chose 'About a Boy' for this year's Big Read, next year he wants you to choose

YOU choose the next Big Read, says Vice Chancellor

Written by Alexandra Pedersen on October 21 2015

VC Professor Julius Weinberg has said that the book chosen for this year’s Big Read projects was his idea, after criticism that it did not represent the life of many KU students.

The 12,000 printed copies of the Big Read KU special edition of ‘About a Boy’ by KU alumni Nick Hornby received overwhelmingly good feedback and enthused students and staff, but Professor Weinberg agrees that finding a book for everyone, isn’t easy.

‘About a Boy’ is a coming of age novel which was published in 1998, about a man that doesn’t know how to grow up and a boy who already has, who coincidentally become friends. In 2002 it was made into a film with Hugh Grant in the lead role.

Weinberg explained that while everybody may not directly relate to the characters in the book, it had one overall topic he thought everyone would be able to relate to. The author being a KU graduate was just an added bonus.

“The next challenge is to think of next year’s book, and I’ve got some ideas, but what I really wanted was to engage the student in helping us think about next year’s book, so what we are going to do is a consultation to see what good ideas we get.”

The Big Read project was the first of its scale in the UK, and was mostly coordinated by Dr Alison Baverstock, Senior lecturer in publishing, along with a group of her students.

The Big Read project was the outcome of a SADRAS project, where students and academics do a research project together. Through surveys around KU Dr Baverstock and her group found that many students enjoy reading for pleasure.

“Over-concentration on which title is chosen is not the most important thing about The KU Big Read. Whatever book we choose will not please everyone,” Dr Baverstock said. “I think the shared communication around a single title ultimately matters more than which book is chosen.

The new book should be decided upon by January, and Weinberg said that he would hope students take ethnic minorities into consideration, when choosing the book they think would appeal to most KU students.

“It’s great that it’s been such a buzz, people are reading, thinking and talking about it. That’s all it was meant to do. Alison did a great job and the students did a great job on that,” Mr Weinberg said.

“It has been a great project on all levels and everyone has got a lot out of it,” he said. “It’s great for the University, and I want the students to start being proud of Kingston, because they are at a university that does things just a bit differently. A bit edgy, thinks things a bit differently, and tries things out.”