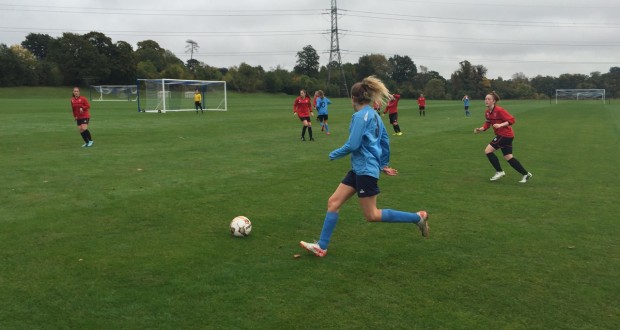 Charmaine True grabbed a superb hat-trick, while Diana Padeva and Oda Holum each got a goal in an impressive performance against a weak Essex side.

In the space of ten minutes in the second half, True effectively killed off the game by scoring three goals to secure The Cougars an empathic win.

True said: “We have been working on finishing this past week on the training ground, and it is good to see it paid off.”

In a decisive display in the second half, where Kingston Ladies really picked up the pace, the home side scored four of their five goals.

The home side dominated the first half and Essex Ladies were lucky to escape with only one goal against them before the break. Despite creating chance after chance, the Kingston players simply could not find a way to kill the game.

It was clear that the visitors had learned a lesson in the first half where midfielder Padeva was the star performer. She picked up passes wonderfully and created lots of chances for herself and for her teammates.

Despite their efforts, the away side simply could not contain Padeva and she and her team continued to pester a shaky Essex defence after the break.

The hat-trick queen was very pleased with her team’s performance. She said: “After losing the first game of the season, we needed a win here. Now that we have found our feet, we want to continue the good form.”

Despite being up by one goal at half time, the first half was a frustrating one for Kingston Ladies. The home side created lots of chances and should have scored more goals in the first 45 minutes.

Alongside the hat-trick hero, Padeva was the other star performer of the match, and grabbed a well-deserved goal late in the second half. Oda Holum scored the final goal of the match a few minutes later.

The victory earned Kingston Ladies their first three points of the league season and they now sit third in the British University & Colleges Sport – South Eastern table. They face the Queen Mary Ladies first team in their next game.