Written by Rebecca Gouldbourne on December 7 2015

Human Love is the fifth album of the musician, who is influenced by the likes of Stevie Wonder, James Brown and Jurrasic 5, and follows his last album Studio Zoo (2013).

It consists of 11 tracks and the deluxe version of the album also features five stripped back acoustic versions of some of his songs.

The 30-year-old, whose real name is Sam Newton Battenberg Faulkner, has stated that he made the joint decision with his brother, Toby, to design the album to make it sound big live.

After listening to each track, it is clear to see tickets to his live shows will sell out rapidly. 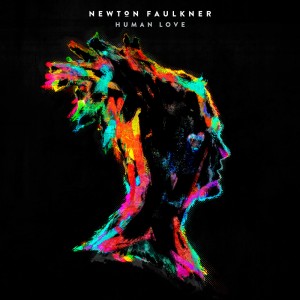 Although developing and experimenting with his style and creating an even more concise and pure vocal tone, Faulkner has still held onto his signature folk rock and pop acoustic style.

His hypnotising voice captures your main attention whilst blending in flawlessly with the instrumentals to create tracks which consume you; his attention to detail is spot on.

The album kicks off with Faulkner’s version of Major Lazor’s Get Free which he personalises with his distinct style and vocals which make the hairs on your arm stand up.

The deluxe album also features a clean cut acoustic version, with just him and his guitar.

Back in September, Faulkner released the music video to this track, where he is seen chopping away at his trademark dreads.

Up Up and Away blends afro beats aspects with passionate chanting and uplifting lyrics, resulting in a buoyant piece delivering positive vibes.

Subtle drum sounds coincide with gentle vocals and harmonies in Step in the Right Direction, a track which starts of steady then builds up and evolves into an explosion of emotion and intensity with heavier guitar sounds. The ideal track for a festival and being in a crowd.

Winning its place for what could potentially be one of the most memorable tracks on the new album, Passing Planes exposes Faulkner’s more rocky sides.

He shows us the full potential of his voice as he belts out personal and meaningful lyrics.

Another track that holds this structure is Shadow Boxing. The numerous layers in this track have been placed beautifully; it is one of the best produced tracks on the album.

Stay and Take features 22-year-old musician Tessa Rose Jackson, whose music is often written and produced in her own studio she built at home. Her vocals work perfectly together with Faulkner’s. The track has an almost choir- like manner towards the end, and there are moments where the track explores the raw and punchy voices of both musicians combined without any instrumental influence.

Its slow pace beats are calming and its catchy lyrics will surely be the feature which makes this track addictive.

All the featured songs have an overall chilled out and spiritual energy and each have the potential to be an unforgettable piece of work. It’s the kind of album which fits in at any occasion at any time of the day.

Faulkner will be heading off on a full UK tour as of November 13th to support the album.   For more information on tour dates, go to http://www.newtonfaulkner.com/