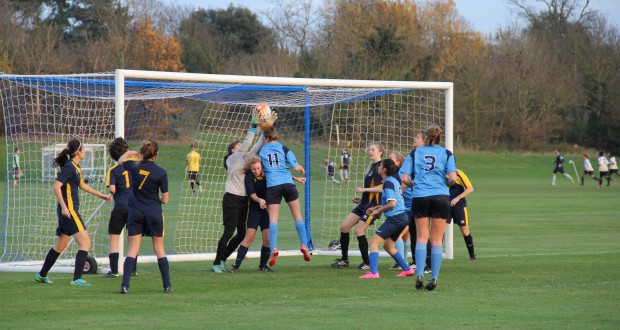 Kingston ladies climb the table in ‘toughest’ game yet

Written by Leigh Boobyer on December 14 2015

“This is the toughest game we have had. We had to set up well and put that extra work into getting that second goal and securing the three points.”

Kingston dominated possession in the first half with strong midfield play and key passing, which led to over five through balls towards Charmaine True and Diana Poveda, all of which were hit to the wrong sides of the post.

The cougar’s captain, Oda Holum, crossed the ball from a corner to Poveda who claimed a successful touch, but a rolling deflection of the keeper allowed the ball to be scrappily fought for by both teams, and slip past the goal line.

Kingston’s keeper, Ashley Macey, miskicked the ball from two goal kicks, 10 minutes into the second half, each team capitalised with tense attacking play.

Diana Marcela, one of the star players for the woman’s team this season thus far, sprinted on a solo run on the wing and cut into the box, producing a low driven shot past the keeper into the back of the net.

Moments after, True secured Kingston’s third goal straight from kick off with a curled effort into the top corner just outside the box.

However, King’s College put pressure on Kingston after a corner to King’s Aisling McMgeough’s volley which went straight into the net.

Captain of the Kingston women’s team, Oda Holum said: “Great, amazing. We needed to win this game. They were a good team”.

Kingston women’s first team are neplaying Middlesex University women’s next, who are currently bottom of the table, at home at Tolworth sports ground, December 9 at 2pm.