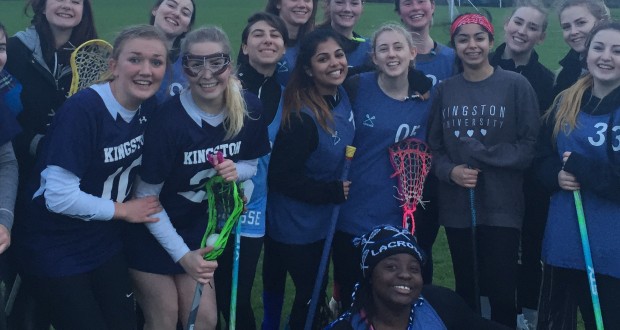 Kingston began the match on the front foot after vice-captain, Emily Latham, whizzed past Brunel’s defence to make the score 1-0.

Latham said: “Everybody played really good. It was an impressive game. Brunel fought really hard but we managed to still win. Everybody was less tired and really keen. I was able to have a lot of possession in the first half. I was able to do a lot more fast breaks than normally.”

Kingston went into the game on the back of two victories which saw them sit one place below Brunel in fourth place.

Kingston’s captain Marte Fjell said: “I am very proud because we lost our last game 8-4 to Brunel so winning 14-4 is a massive improvement. We worked on everything we needed to work on and we came in much stronger than we did in the last so I’m extremely happy.

“We started this season all as freshers never having played together before, so we never actually thought we would win the first couple of games. But we have won this game and the last, so we have the feeling we could actually do this because we have formed a really good team bond over the two wins.”

Jordan Elliot was another American who shone throughout the game after scoring five goals, one of which was brilliantly assisted by the superb Latham who played her in with a textbook pass.

Elliot said: “I thought everybody played really good. In America there are different rules and we play more aggressively. It’s different because we start playing when we’re kids versus people who only start out playing in university. But it’s cool to watch people grow after them just picking up the stick one day and then a few weeks later they get the hang of it and begin playing. It’s really good.”

Kingston’s first half was summarised with a wonderful bottom corner finish by Synne Johnsson who scored two goals for Kingston’s Cougars.

In the second half Brunel came out the blocks in fierce fashion managing to get a few goals back. However Kingston’s ladies were too strong for them after they defended brilliantly to hold on to their whitewashing of Brunel.

Schmidt said: “I was really proud of everybody because we did really well. This was my first win with the team. It was so cool because we all came together and played as a team. Although the standard in America is higher it’s fun to see everybody fall in love with sport here.”

Brunel’s captain Nancy Paldins said: “I feel we weren’t tight enough in defence. Kingston made a great improvement since the last time we played them because they had a really good game. We had a weak team.”