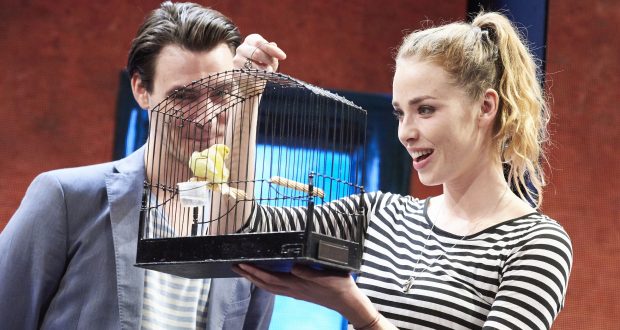 Written by Lauren Hockney on October 5 2016

Kingston is transformed into to Manhattan as Good Canary – directed by Hollywood legend John Malkovich, took to The Rose theatre at the end of September.

The play follows Annie (Freya Mavor), a self-destructive young woman who likes a drink and is addicted to amphetamines. Her husband Jack (Harry Lloyd), who for the majority of the performance we see as a debut author, has devoted his life to taking care of Annie, who he believes he can fix – but Annie believes she is truly broken.

Though the set-up at the Rose seems a bit minimal on arrival, with a lone table and chairs sat in the middle of the stage, you soon realise that what the performance lacks in props is made up for by its visuals. The set-up has three electronic screens that project images and move around depending on the location. The familiar places we see are a New York skyline, the couple’s apartment and a coffee house they regularly meet at. These backgrounds become somewhat familiar to you through the two-hour play, to the point of which you can tell if something good or bad is going to happen when you see the scenery switch.

One memorable scene in the play, which the visuals add to, is when Annie has just taken amphetamines and her brain is on quick time. The screen projects her “to do list” for the day, which many of the items on said list include to “take speed”. The items start to cross off and fly across the screens as if they were going at 100mph. The addition of the fast-paced music and the fact that Mavor is cartwheeling and jumping across the stage gives the audience a sensation.

The middle-aged woman sat next to me turned to me at the interval and said: “I’ve never taken speed but after watching that scene I can just imagine exactly how it would feel.”

The production does showcase a lot of sensitive issues, specifically relevant to the younger generation as drug addition and mental illness is heavily highlighted within the young character of Annie. Her husband Jack appears to be the author to the audience, but a twist in the plot reveals it is in fact Annie who has wrote the book and published it under his name. The fear of failure and that being attached to her name is something she is unable to deal with. The way Malkovich has directed this play to give you an insight into Annie’s mind, which makes your heart ache for her. Even though she is damaged and appears reckless to everybody else, we get to see her at her most vulnerable. 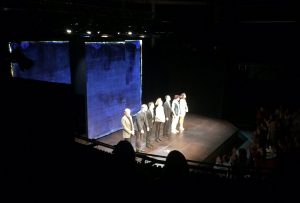 The cast of the Good Canary before taking their final bow

The Rose Theatre’s production of Good Canary is the first time it has been performed in English. Even though the writer Zach Helm is American, the play had only been showcased in France and Mexico prior to this.

So, if you want a play that has a lot of swearing in it and that will make you laugh as well as cry then this is the play for you. It is inappropriate yet appropriate at the same time but showcases some truly great acting from Mavor and Lloyd. It is not one to be missed. Go hear the canary sing!

Good Canary is on at The Rose Theatre until October 8.