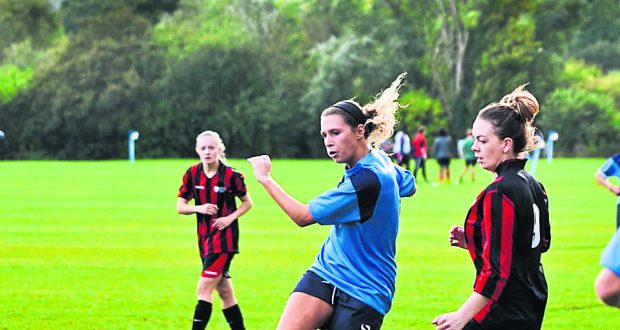 Written by Laurence Bohan on October 14 2016

In the first game of the new season, Kingston University women’s football team missed a late penalty in a thrilling 3-3 draw with Middlesex University on Wednesday

Kingston’s Pauline Hontanosas scored in the first half and Lizzy Marks scored one each half for the home side before Kingston’s Kelsey Swanger missed the decisive penalty which could have clinched KU the game.

Despite showing lots of fight and determination in a game in which Kingston had more possession, they failed to finish many of their chances, unlike Middlesex who were clinical with the few chances they created, with their strong striker scoring a hat-trick.

In the first half, Kingston took the game to Middlesex, dictating the pace. Captain Hollie Clapham found herself through on goal early on but found no time on the ball with a Middlesex defender making a last ditch tackle.

But it was Middlesex who took an early lead through Maria Romom, who troubled Kingston’s defence all game with her strength and finishing.

Kingston responded soon after with Clapham playing through Hontanosas, who then smashed the ball into the right hand top corner with a beautiful volley.

Kingston’s keeper, Abi Bingham, was tested when she saved a hard volley and then a quick rebound afterwards.

Marks produced a spectacular goal, lobbing Middlesex’s keeper, from far out with a lob that sent the ball over the keeper into the top left hand corner, to make it 2-1 to Kingston.
Room soon equalised, out-muscling Kingston’s defence before sending the ball into the bottom left hand corner.

At the break Kingston’s coach Besim Ali gave an inspiring team talk, telling his team to switch the play and play more balls in behind.

The second half was just as intense as the first with Middlesex’s Romom missing a one on one opportunity and Marks finding herself on the scoresheet again, volleying in an overhead through ball to give Kingston the lead.

History repeated itself soon after when a long ball from Middlesex’s Ailiah Healy, found Romom once again, who equalised from a tight angle.

Then at 3-3 with everything to play for, Clapham dribbled down the wing and, with a low cross, found Hontanosas, who took the ball away from the keeper and tripped over her winning a penalty.

It appeared that nobody wanted to take the decisive penally but eventually Swangner stepped up for it but skied it high over the bar.

There was one last good chance for the cougars when Clapham ran with the ball, shielded it away from her defender, played it down the wing to Peterson who used her trickery to beat two players, cutting inside before finding the side netting with her shot.

She said: “I feel like we could have scored more goals but we are a new team and we are still trying to find our shape and positions.

“We just need practice, more fitness and to score some more goals, everyone played really well but it is just down to formations needing more practice time in training to get better so we can play more as a team,” she added.

Kingston’s women’s football team’s next game is on Wednesday October 19 where they are away to University of Essex away, a team they beat 4-0 back in February.