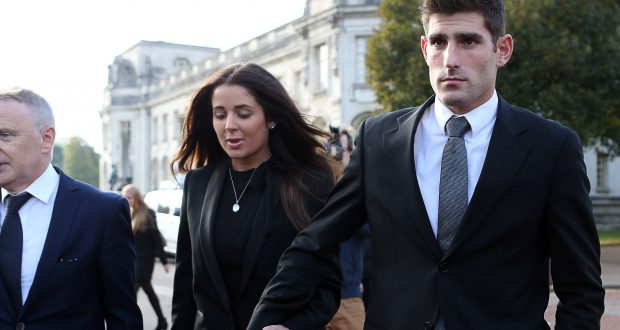 Photo: Huw Evans / Rex features Ched Evans and his fiancee Natasha Massey leaving Cardiff Crown Court at the end of his retrial for rape during which he was found not guilty

Ched Evans should not be allowed back into a position of influence, despite innocence

Written by Jamie Craker on November 1 2016

Ched Evans may have walked away from court ‘not guilty’ of rape on Friday, October 14, but his behaviour on the night in question was miserable, immature and disrespectful, and he should not be allowed back into a place where he holds influence over others.

According to many the retrial which called into question the alleged victim (a 19-year-old woman)’s  sexual history has been a step-backward for the way that the legal system deals with complaints of rape, and I believe, could cause another step-back in our society, if Ched Evans is allowed back into a positive limelight.

Evans is not a good role model. He cheated on his girlfriend. He had sex with a woman he had never even spoken to, who he admitted seemed drunk in the bar but not in the hotel room, without even knowing her name and then left her alone in a Premier Inn while he left via the fire exit.

The BBC reported that Evans told police he “could have any girl” in the bar on the night of the alleged rape, and that “footballers are rich, they have got money and that’s what girls like”.

As tweeters have been quick to point out, this language horribly echoes the recent claims made by Donald Trump about his entitlement to do whatever he wants to women because he is famous.

In court, Evans described walking into a room where his friend and the woman were having sex as “childish”. He said his behaviour was “not the best” and now a website baring his statement prior to proceedings confirms that his behaviour was morally UNacceptable.

Evans is a star, and pretty much regardless of the back-pedalling and apologising he does, people are going to leap to his defence whether he wants it or not– ‘#Ched’ will become a catalyst for hate.

If Evans is allowed back to play for his team, Chesterfield, he will be looked up to – his ignorance hero-worshipped, his immaturity copied by adoring fans. Men will use his success story as a licence to hate.

The related twitter tags are enough evidence of this. Supporters of the footballer began their onslaught of misogynistic, hate-fuelled tweets soon after the verdict was made.

The Independent reported a selection of these tweets, including: “That b***h who ruined Ched Evans’ career deserves to die. He is my new hero and I hate feminists”, “Ched Evans found not guilty, after all this time. The girl should go to prison, lying s**t c**t slag”, and “Ched Evans what a man #shesaidyes”.