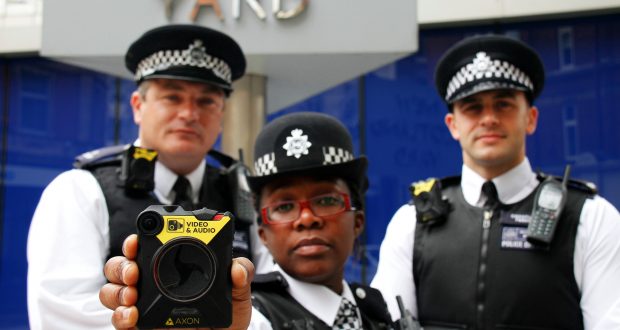 Police officers showing the new body cameras and how they will be worn. Photo credit: Metropolitan Police Press Office

Kingston police to wear some of 22,000 body cameras issued in London by Metropolitan Police

Written by Anastasia Edwards on November 15 2016

The Metropolitan Police Service (MPS) has launched what is thought to be the largest issuing in the world of officer-worn body cameras, and Kingston will be in phase three of the deployment.

Although an exact date is yet to be set, it is expected to be in effect by spring 2017, when every officer who comes in to contact with the public regularly as well as front line officers will be issued a body camera.

“Video captures events in a way that can’t be represented on paper in the same detail, a picture paints a thousand words,” said Metropolitan Police Commissioner, Sir Bernard Hogan-Howe.

“It has been shown the mere presence of this type of video can often defuse potentially violent situations without the need for force to be used.”

Body cameras have already been issued to officers in boroughs like Lewisham, and over the coming months, will be issued to all 32 boroughs, equating to over 22,000 MPS front line officers.

According to MPS, the use of body-cameras is to improve street safety and enhance the service it can give to the people of London. The large-scale deployment began on October 17 2016.

“Our experience of using cameras already shows that people are more likely to plead guilty when they know we have captured the incident on a camera,” said Sir Bernard Hogan-Howe.

“That then speeds up justice, puts offenders behind bars more quickly and most importantly protects potential victims.”

This has proved to be particularly successful in cases concerning domestic abuse, where there has been an increase in earlier pleas from offenders who knew their actions have been recorded.

After a successful trial in November 2015, Axon Public Safety UK Limited was awarded a three year contract worth £3.4m  to supply the 22,000 cameras by the Mayor’s Office for Policing and Crime (MOPAC).

Mayor of London Sadiq Khan said: “Body worn video is a huge step forward in bringing our capital’s police force into the 21st century and encouraging trust and confidence in community policing.”

“As we roll them out across London, these cameras will make a real difference to officers, as they continue their great work on the front line fighting crime and keeping our city safe.”

The cameras will be worn attached to the officer’s uniform and will not permanently record. When the camera is recording, it is highly visible, with a flashing red circle in the centre and a frequent beeping noise.

The public can, on written request, view footage taken of them, as long as it is within 31 days and the footage has not been marked as policing evidence and therefore must be retained.