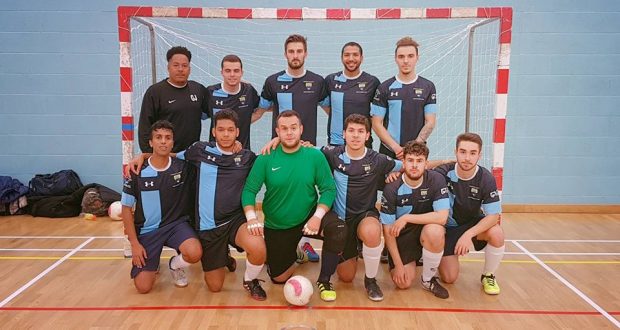 Written by Laurence Bohan on November 23 2016

The win made it five wins from five for KU’s newest sports team who cemented their place at the top of the BUCS South Eastern 2A League.

Expectations for Kingston were high after last week’s 21-2 demolition of Roehampton and the Cougars did not disappoint, as they once again hit double figures in front of goal.

Hat-tricks from Josh Emmanuel and Mohamed Osman added to the team’s burgeoning goal difference, while forward Alejandro Bander Ruiz marked his return to action with a brace.

Nas Mansouri, Ivan Klasnić and the immensely talented, Jurgen Kukeli, were also on target as KU made it 55 goals for the season.

Although the team is scoring goals in abundance, coach Gideon Jackson was not happy at the team letting in six goals, the most they had conceded in a game all year.

Jackson said: “To concede six goals in a game where we should have only really conceded one or two is disappointing, to be fair I think they only scored two good goals. Other than that it’s good to get a win.”

Jackson had said before the game that everybody in the division was “looking at Kingston” as the team to beat after their strong start to the season.

The futsal team remain KU’s only team not to have tasted defeat this year and are already looking strong favourites for the title and promotion in their first season competing in BUCS.

“Looking at it, I think it is definitely possible that we can go the whole season unbeaten. I’m really pleased with the lads, I think the squad was really strong today and it’s nice to have a bench where you can bring players on and not weaken the team,” said Jackson.

The game’s kick off was delayed for 25 minutes due to the referee being unable to find a parking spot but when play did begin, KU were in the driving seat from the outset and sped into a 2-0 lead.

Kukeli set up Emmanuel for a tap-in for the first before himself rifling in from distance as the away side looked set on repeating last week’s goal blitz.

Imperial pulled a goal back in the sixth minute and almost scored again but were denied by goalkeeper Youssef El Hana, who got down well to tackle the onrushing forward.

Croatian defender Klasnić rounded off a great Kingston move in the twelfth minute to restore KU’s two goal cushion before Osman found himself completely free in in the area to tuck home an easy fourth.

KU made it five before the half was up, as Ruiz got the deserved goal which his play had thoroughly deserved.

The striker, who plays for Deportivo Toledo B in his native Spain, snuck in at the back post from a free kick for an easy finish.

As the whistle blew for the start of the second half, KU produced an almost carbon copy of the goal which they had scored in the first minute of the first half, Kukeli squaring it across the box for Emmanuel to poke home.

Emmanuel then completed his hat-trick with a neat finish from close range before Ruiz and Osman completed their braces either side of a goal from Imperial.

Osman got his hat-trick with ten minutes to go to take KU into double figures for the game, as the away bench were finally able to relax and joke amongst themselves.

With the game seemingly in the bag, the Cougars lowered their tempo which Imperial capitalised upon, scoring two quick goals to threaten a late revival.

Imperial’s comeback proved short-lived, however, as Mansouri scored the goal of the game after a brilliant KU team move which finished with the defender blasting the ball through the legs of the keeper.

The home side got a further consolation goal with the last kick of the game but Kingston’s win, as it had been all game, was never in doubt as they got the win to continue their impressive start to the campaign.