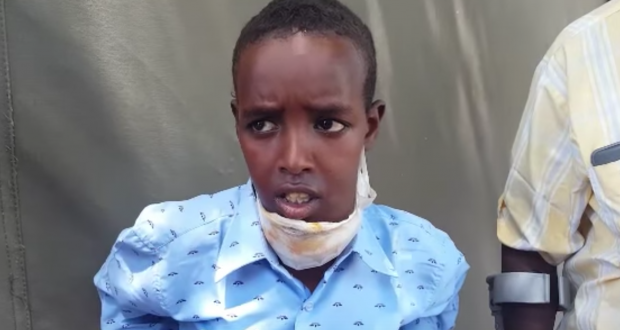 Written by Oda Ottesen on December 1 2016

A KU student from Somalia is fundraising online to save her 13-year-old cousin’s life, after a “gruesome” tumour growing on his face and neck has left him barely able to move.

Due to the limited treatment options available in the Somali capital Mogadishu, Ali Abdi Omar needs a medical visa in order to get treated abroad, and his family fears his time is running out.

“He used to be an active child who played football with his friends and spent a lot of time outside,” said his cousin Samira Barkhadle, who studies biomedical science at Kingston University.

“Now he is in a lot of pain. He says that it’s difficult to even move around.”

However, they have recommended that his parents seek out treatment in a “more developed country” for a more accurate diagnosis and safer treatment options.

The symptoms have progressed since the middle of 2014, and at this stage the tumour has grown so big and “unsightly” he has had to put his education at the local mosque on hold.

“I cry every time I notice the other children talking about me or looking at me,” Ali said. “To me, it’s worse than the physical pain I’m feeling.”

Samira said she first heard about Ali’s diagnosis a month ago, and felt right away that she had to do something to help.

As her cousin is from a nomadic family his parents have moved around all his life, and they earn just enough money to get by.

Even though Samira has grown up in London, Ali was still family to her, and she knew his parents were struggling to get money.

“[His family] were really shocked by the response,” Samira said. “People have given their money to a kid they don’t know which is really amazing to me. It’s touching.”

After seeing how difficult it is to get treatment in his home country, Ali now dreams of becoming a doctor so that he can help others in the future.

He said he once heard his parents say that if there were doctors nearby, he could have been treated, and wants to make a difference if he ever gets the chance.

The family’s safest and most affordable option is a hospital in India. However, acquiring a medical visa has proved difficult and expensive.

Samira’s Gofundme page has raised just over £2,500 so far, but the family needs more to pay for the medical fees, travel and accommodation near the Indian hospital.

“A lot of my friends and family have donated as much as they could afford,” Samira said.

“But honestly I’m just as grateful if people share it. I’m just hoping that he will get the treatment soon, because he is so young and he needs to carry on with his life.”

To make a donation to help fund his lifesaving treatment, visit Samira’s Gofundme page on gofundme.com/alismedicalfees.