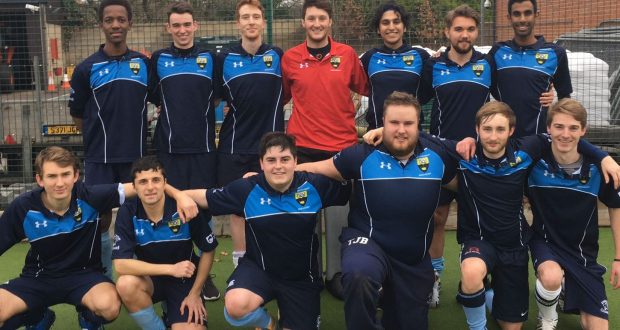 This was not an ideal start to 2017 for the KU Cougars.

On a day when many of its sports teams were due to return for the first time this year, many could not not because the pitches were frozen.

All home matches at Tolworth were cancelled, including both women’s rugby and tennis teams, men’s basketball first team and men’s football second and third teams.

Out of the five games that were played, Kingston won two matches, drawing one and losing two. The hockey teams stood out, winning both their matches.

The KU Men’s first team travelled  to Chichester and returned with a 1-1 draw after Gurpz Talta headed in an equaliser.

This was their fourth draw of the season, dropping points in their BUCS South Eastern 4C League but they remain unbeaten in the league and are still title challengers sitting in second place with 10 points.

Captain Sam Pledger said: “It’s a disappointing result against a team I feel we should be beating comfortably, but there are still four games left so all we can do is try and win those and hope for the best.”

Naomi Ponting scored with a wonderful strike in the top corner but Kingston conceded two goals in the first half and four in quick succession in the last 25 minutes of the match after centre back Shana Alt had to be substituted after twisting her ankle.

Captain Hollie Clapham said: “We haven’t been able to train on a full size pitch since before Christmas because of Tolworth pitches so our shape was a bit disjointed, I think we did the best we could have.

“It was an unfortunate game but overall I was happy with the team that played.”

The best performance this week has to be the women’s hockey team who beat Brunel University 5-0 in an away match.

Kingston remain top of the table of BUCS South Eastern 2A League much to the delight of Miss Waight.

She said: “I am very pleased with our result and it’s great to be top of the league, which only last year we were promoted into.”

The Men’s Hockey team showed some class in winning 3-1 at an away game against league leaders Reading University with a hat-trick from Ben Spencer.

Kingston are real title contenders, at second spot in the table of BUCS Hockey 3A League with 9 points and with a game in hand, just three points away from Reading whom they will play again, at home on February 22nd.

Club president for the men’s team, Josh Barron, said: “Reading played to one of our strengths by allowing us to contain them in possession and hit them on the break and we could not be happier with the result.”