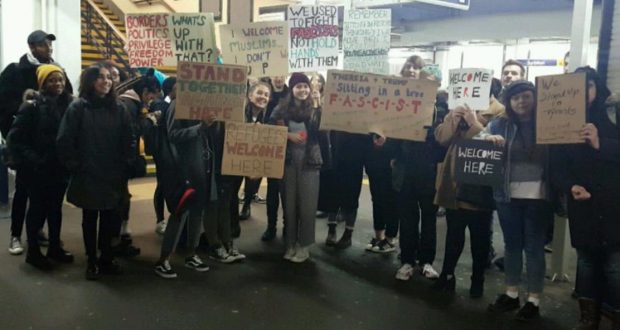 Students were amongst thousands of protesters at the emergency demonstration, sparked when US President Trump signed the order on January 27.

John Morris-Esparza, 24, a KU masters student of international business management from Texas, said that he went because the ban was “inherently un-American” and went against everything “good humans” stand for.

“If you don’t make your voice heard now then you’ll regret it later. Now is the opportunity to be on the right side of history, so you should take that opportunity,” he said. 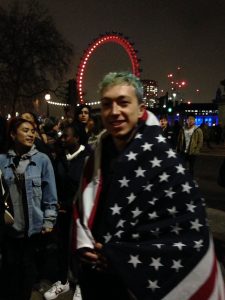 Trump’s executive order “protecting the nation from foreign terrorist entry into the United States”, bans citizens from Iran, Iraq, Libya, Somalia, Sudan, Syria and Yemen from entering the US for 90 days.

It also suspends the US refugee admissions system for 120 days.

Syrian refugees were suspended indefinitely, which encouraged demonstrators to chant: “Say it loud! Say it clear! Refugees are welcome here!”.

Campaigners wanted to communicate to Theresa May that she should not maintain a ‘special relationship’ with Trump.

May further infuriated demonstrators because she refused to censure the ban, which was ratified the same day she met Trump.

“You’ve got a man who’s meant to be the leader of the free world doing such a horrible and disgusting thing, and yet you have the leader of our country who’s not even condemning him and openly supporting him, it’s ridiculous.

“It’s a total piss-take on democracy and quite frankly it’s our duty to stand up and say ‘No, this isn’t acceptable,’” said Kyle-Jake Richardson, 22, history and sociology student.

Students made signs with slogans such as “We used to fight fascists, not hold hands with them”, alluding to a photograph taken at the White House of May appearing to hold hands with Trump.

The public expressed scepticism about Trump’s “true” objectives because nationalities involved in the 9/11 attacks came from countries not included in the ban: Saudi Arabia, UAE and Eygpt.

Joana Alvadia, 21, a demonstrator from KU’s Amnesty International Society, said: “Trump’s Muslim ban is racist, disgusting and needs to stop. May’s appeasement actions in this situation of discrimination are unacceptable.

“If we don’t protest they won’t know we disagree with them and might think they can impose whatever they want when that’s definitely not the case.”

“When I heard about the ban I honestly felt sick and shocked. I was aware of Trump’s Islamophobic speeches but never thought that he would do such thing as banning everyone from seven countries just because of their main religion.”

Tessa is a News Editor for The River and is currently studying a bachelors degree in Journalism with Human Rights at Kingston University. She has previously worked for the Newsquest Media Group, Pollstation opinion sharing network and with the social impact charity Be Enriched.
Alice Wojcik, Tessa Neal 's site">