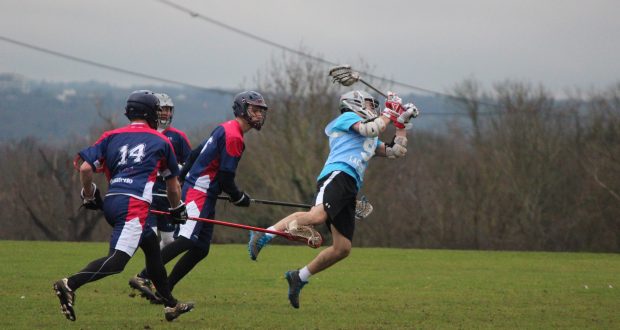 Written by Shani Kotecha on February 3 2017

Kingston University men’s lacrosse team fought hard to get a one-point victory over Sussex, bringing them up to third place in the BUCS (British Universities & Colleges Sport) league.

In a previous away game the KU team lost 4-9 to Sussex, but this time the team managed to score nine goals compared to Sussex’s eight.

Kingston captain Robert Nicoll was immensely proud of the team, and knew they had an upper hand to begin with: “We lost last time but we had three players with injuries, and were missing Alex Winton who is our top scorer.

“We’ve got a stronger defence now because the freshers have been with us longer and have had more experience.”

The game started off with Kingston in possession of the ball, Winton scoring the first goal of the game within five minutes, after three previous goal attempts. 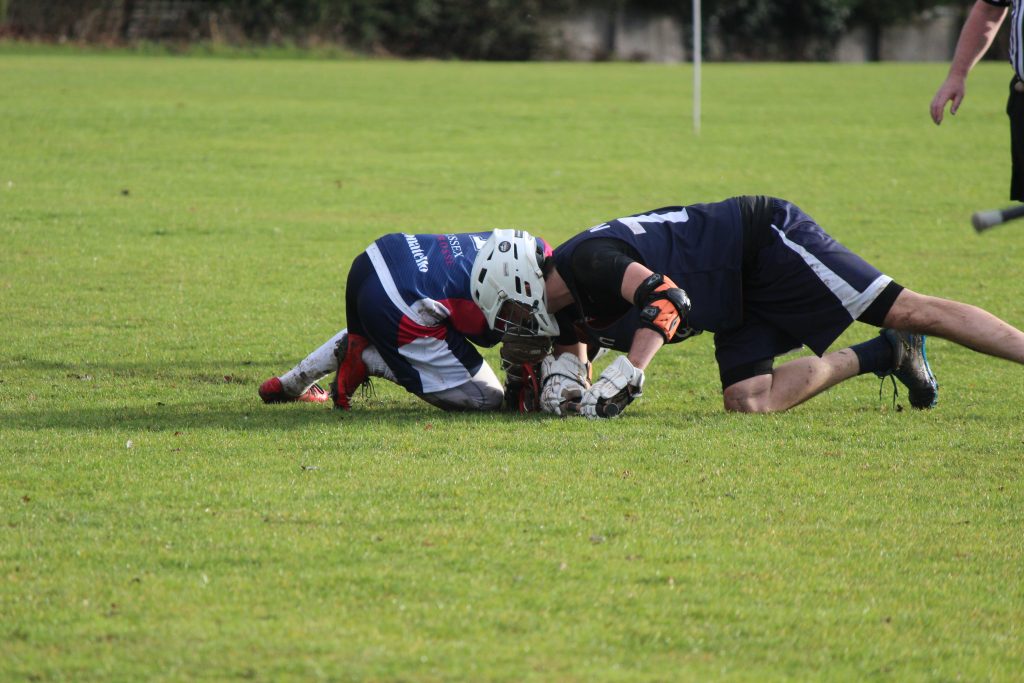 Nicoll fighting for possesion at face off against Sussex. Credit: Shani Kotecha

Kingston’s attack held strong and kept the ball near the Sussex goal, with players Harman Singh and Toby Jeffries working well to run back the ball after any attempts from the opposition.

Kingston goalkeeper Zachary Fountain saved all shot attempts by Sussex bar one in the first quarter, bringing the score up to 1-1.

Daniel Brown was taken off for one minute for slashing, which gave Sussex the opportunity to score another goal, ending the quarter 2-1 to Sussex.

Nicoll was unhappy with the first quarter, but after a short time-out in the second quarter went on to score a goal, tying the teams at 2-2.

Only two minutes later, Winton scored two goals in a row, bringing him up to a hat-trick, and proving him a key player.

Nicoll was enthusiastic at half time, and said: “We are low on men and don’t have as many substitutes as them, but that’s when spirit comes in.”

The second half of the game began at 4-2 to Kingston, but immediately Winton and another player from Sussex scored a goal each, raising it to 5-3. Kingston stayed in possession for the rest of the quarter, and Winton got another goal in, making that his fifth goal of the game.

Sussex was quick to catch-up however, scoring two goals within the next five minutes, forcing Nicoll to call a time-out and regroup the team. 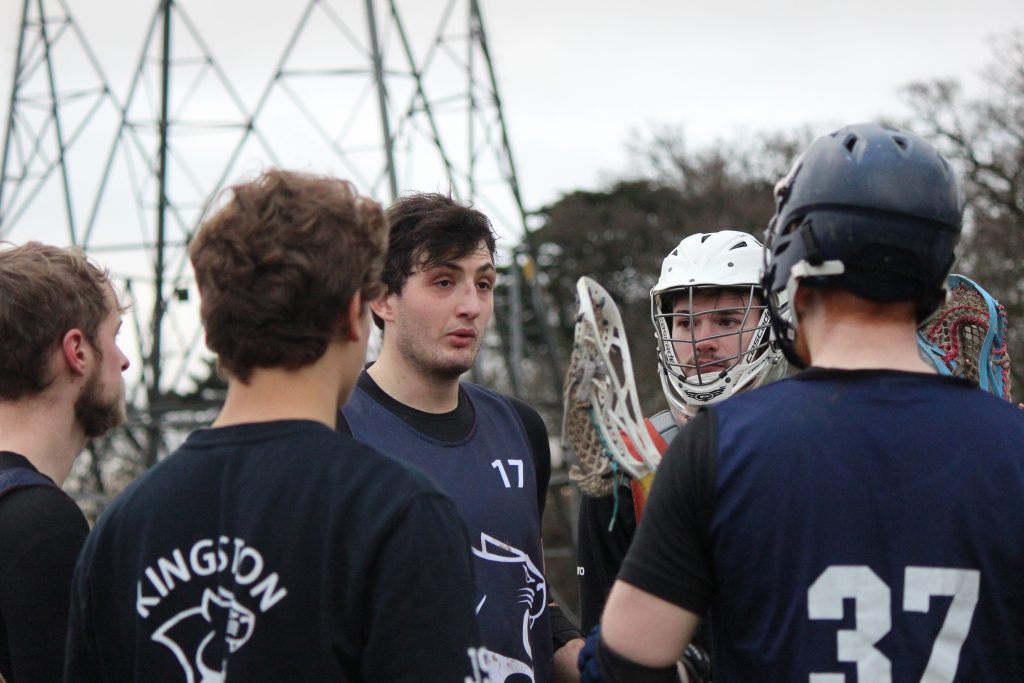 His strategy worked, leading Tyrone Bartley to score the seventh goal minutes before the whistle blew, bringing it to 7-5 to Kingston.

The fourth quarter started badly for Kingston, with Sussex scoring another goal.

The last 10 minutes became a hectic struggle between teams, as the ball flew frantically from one goalie to the other. Winton was able to get a clean shot at the goal, giving the team a last boost of inspiration.

With Kingston player James Lees called off for 30 seconds for a minor foul, Sussex took advantage and got another goal in while Kingston was down a man.

The referee called two minutes remaining, which prompted Winton to sprint down the pitch and score his seventh goal.

The suspense on the pitch was high, as Sussex inched closer with another goal, bringing the score to 9-8. 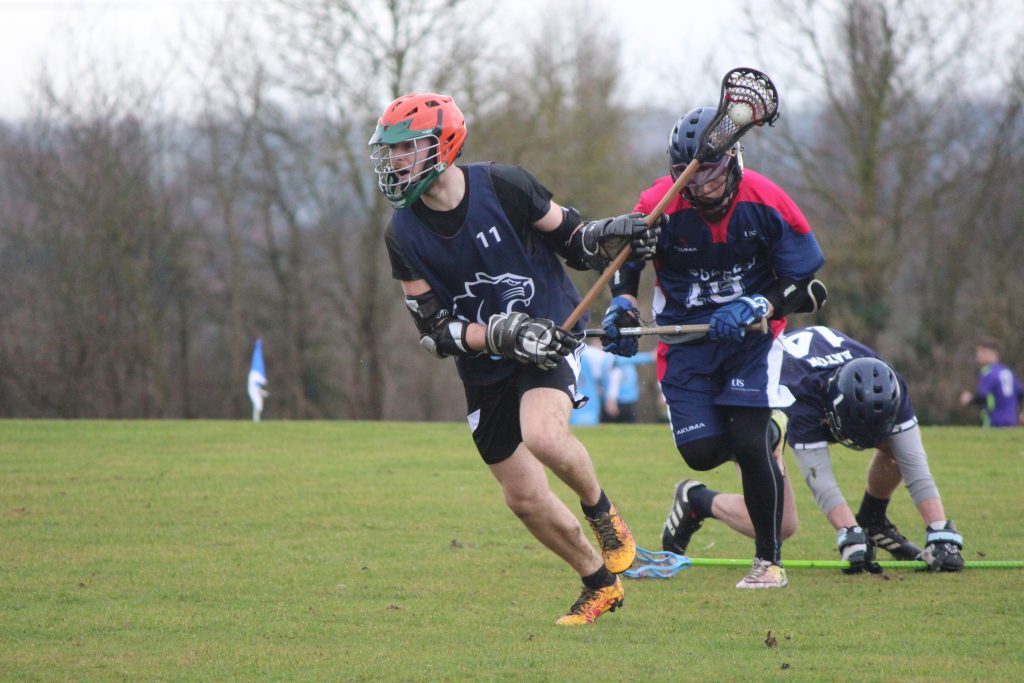 Jeffries running the ball back down to the goal side. Credit: Shani Kotecha

Soon after, the whistle blew and Kingston defeated Sussex to take their place in the table. Previously the two teams were tied in the league, but Sussex was just ahead on points. This victory reverses that, putting Kingston ahead.

Top scorer Winton said: “It was a tremendous effort and Zachary and Toby made a huge difference to the game. Overall, satisfied.”