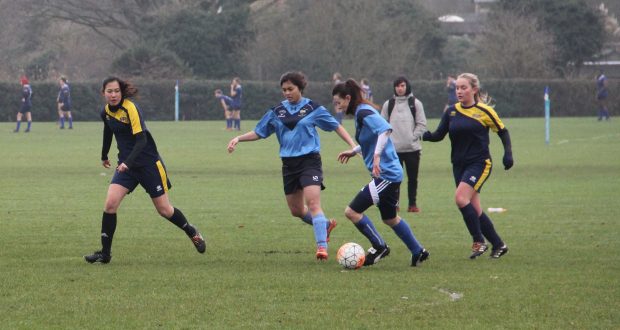 Written by Michael Lloyd on February 18 2017

There was not much to be cheering about for KU Cougar fans since Kingston lost nine out of their overall 11 matches.

But the men’s rugby and men’s hockey teams had a lot to celebrate.

The men’s rugby beat University of Surrey to reach the semi-finals of a cup competition and the men’s hockey team won their game against Royal Holloway, University of London, to stay top of their league.

They are now in fourth place, five points away from St Mary’s with only three games left.

Captain Sam Pledger was frustrated about this and annoyed with his team’s “average” performance.

He said: “Another bad result and now it’s just turned into another pretty average game which is disappointing because I think we’re good enough to win this league.

“We play at a fairly high level so it’s just instinctive for us to want to win.”

The women’s first team did not do well either, losing 5-2 at home to Kings College London.

This match was mistakenly displayed as 5-2 in Kingston’s favour on the BUCS website, which claimed Kingston had seven points in the BUCS South Eastern 2B league.

In reality, Kingston lost 5-2 and were still in a relegation battle, and were at the bottom of the league with four points.

To have any chance of staying up, they have to beat Royal Holloway, University of London in an away game on February 22.

With 15 points, Kingston are now leading the title race of the BUCS South Eastern 3A league.

Reading University’s third team are currently in second place, equal on points but with one game in hand.

On February 22, Kingston will be playing them at home and will be looking to repeat their win from January 25, where they won 3-1 in an away match.

Their captain, Bahador Eskandari, was very pleased with the performance and said he was looking forward to the semi-finals.

He said: “Good result and what makes it that much sweeter that it was against Surrey, our old bitter rivals.

“I’m very proud of all the boys and the performance we displayed. We showed good composure throughout the whole game.

“I’m very delighted to progress to the next round. We set targets this year one of which is to win the cup and this victory has taken us a step closer to achieving that goal.

“We have University of East London in the next round and I’m really looking forward to the challenge ahead.”