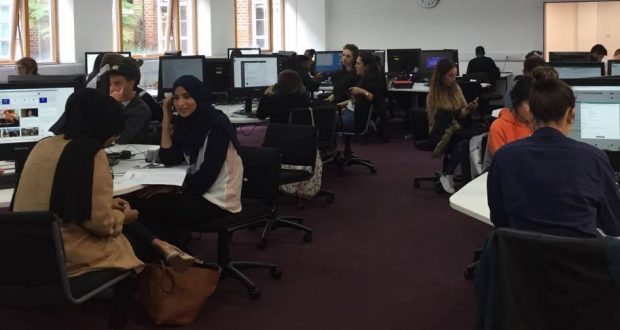 Students use the computers at the Penryhn Road LRC.

Computer trouble across all KU campuses

Written by Lacey Jones on October 5 2017

Global teams worked through Tuesday night to find the cause of the network issue affecting Kingston campuses since Monday afternoon, a Kingston spokesperson said.

Chief information officer Simon Harrison said the problem was investigated by the manufacturer Alcatel’s research and development teams based in India, the US West Coast and Europe.

“Evidence is now pointing to a hardware module fault, although more investigation is required,” Harrison said.

Students and staff suffered from slow computers as a network issue caused problems across all campuses since Monday afternoon, Harrison said.

First year computer science student, Daniel Krupa, tried to print out his student finance declaration form from one of the computers in the Penryhn Road LRC.

The issue affected people differently depending on what campus they were in and, as of Tuesday afternoon, Penryhn Road was being affected the most.

Libby Seyers, second year human rights and creative writing student, waited over five minutes for her computer to log on so that she could print something before her lecture.

“I’m going to have to abandon and go back,” Seyers said. The computer failed to log on and she had to shut it down manually before she left the library.

The faulty hardware was replaced September 27 and Harrison said that the network seemed to be functioning well even as traffic increased during Thursday morning.

“We will continue monitoring today, supported by the manufacturer, to ensure any residual issues are addressed as quickly as possible,” Harrison said.

To keep up to date and informed Harrison suggested students followed the service desk Twitter (@KU_Servicedesk).