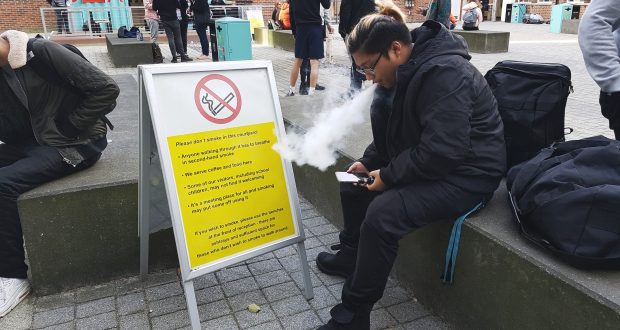 E-Cigarettes are the latest smoking accessory banned by Kingston University in an attempt to stop second-hand smoke intake.

Students smoking the electronic cigarettes could face being reprimanded if they are caught in unassigned smoking areas, including the John Galsworthy courtyard.

Ian Appleford, Head of Health, Safety and Security at Kingston University, said: “The University treats e-cigarettes in the same way as any other smoking material in its smoking policy. We have recently updated our signage around the University to clarify this.”

He continued: “The policy states that there should be no smoking inside a building, within 10 metres of a building entrance or near open windows. This is to reduce the likelihood of people inhaling smoke as they make their way in and out of buildings.

The notice board warning students not to smoke in the courtyard, has not prevented them from smoking cigarettes or e-cigarettes.

A cleaner at Kingston University’s Penrhyn Road campus, who did not wish to be named stated how he wants students who do choose to smoke, to put cigarette butts in the bins provided.

Students who smoke in the John Galsworthy courtyard are more concerned that there is not an alternative place to smoke at Penrhyn Road.

Maria Pereira, 21, an interior design student said: “If you can’t do it here, where else can you do it? People are going to smoke regardless. I don’t think that this is a place where you shouldn’t smoke as it is outdoors and there are no children around.”

Pereira exclaimed: “I did not know that we couldn’t smoke here. Everyone is already smoking. If they made everyone smoke at the front of the uni that looks even worse. That’s the front of the university. If there was a better designated smoking area like there is at Knight’s Park, it would hide it a little bit better from the public. The courtyard is a nice little hub where you can get from building to building.”

Haroon Mohamed, 20, a business and communications student said: “I think it is a good idea to have the courtyard as a smoking area. It is a place for students to relieve their stress. It is a very convenient place to smoke as I have all my lectures in JG.”

Following the opening of the Coffee Box in the John Galsworthy courtyard, smoking has been prohibited in the courtyard and the adjacent alleyway. As food is now being served in this area, the University feels users will appreciate it being smoke-free.

Yusuf Ahmed, 19, a business management student said: “I’m a heavy smoker, it’s ridiculous. People should be open to the idea of students smoking in the courtyard.”