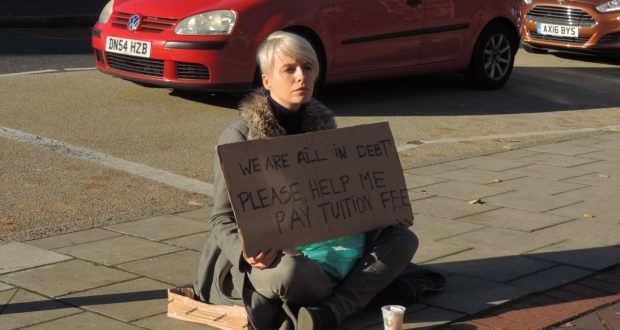 KU student kicked out of Penrhyn Road campus for protesting

An Erasmus student was thrown out of Penrhyn Road campus for protesting against student debt on Monday (November 6) .

Katarzyna Kaczmarczyk, an arts and social sciences student from Poland, staged the protest  to get students and staff involved in a conversation for her project.

Kaczmarczyk said: “I feel as if education should be free no matter what the system says.

“It’s not a lot of money but then you have this knowledge that you’re in debt and it affects your decisions and quality of life.

“Do we even know how big of a group we are and how potentially loud areOUR voice could be?”

Kaczmarczyk originally sat down on the floor in the cafeteria with a sign saying ‘we are all in debt, please help me pay my tuition fee’ and a money pot for donations.

Shortly after, she was ushered out by Kingston University security because she was protesting on ‘private property’.

Head of Department of Psychology, Fatima Felisberti, said:  “This year’s theme week is based on inequality, poverty and resilience and it begins on the last week of November.”

“It’s all a part of the idea that the students had to raise awareness, but I forbid her to go into town.”

Kaczmarczyk received hostility from other cash-strapped students as they argued that everyone was in debt, confused as to why she was seeking help.

The students argued that they signed up for university knowing they would accumulate debt.

Journalism student Eric Brain, 20, said: “I chose to study in London, once I finish uni I will pay back £30 a month.”

Brain, who has a part-time retail job, questioned Kaczmarczyk on her financial support, if she works and what she expected from her ‘unclear’ sign.

After being escorted out of the university, Kaczmarczyk continued to protest outside.

Kaczmarczyk raised just over £15 and the money will be available to be taken by anyone in need at the upcoming exhibition during ‘theme week’.