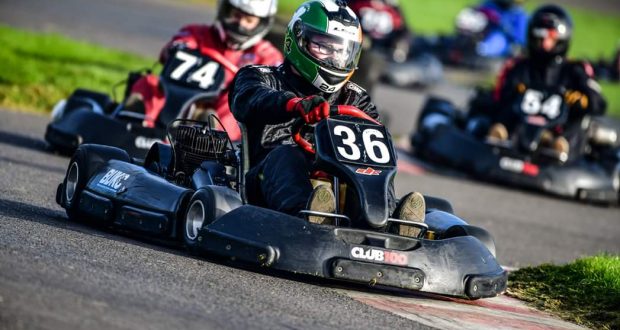 KOKS raced into the national championships that will start in January. Photo: BUKC

Written by Louie Chandler on November 27 2017

Kingston University qualified for the British Universities Karting Championships after finishing in the top 40 teams in Sunday’s qualifiers.

They will race in the intermediate league after finishing just three places below the final premier league qualifying spot.

“I think we’re definitely stronger this year than we were last year,” karting president Sam Righton, 21, told The River.

“Last season was probably the worst season I’ve been involved with.

“But everyone has an extra year’s experience this time and, judging by the qualifiers, I think it will be much better this year in terms of results.”

Last year the Kingston Original Karting Society (KOKS) finished 40th out of 54 teams, but hopes are higher this season.

Righton blames this on a mixture of bad luck and a lack of consistency within the teams. 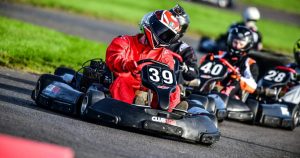 The whole team are hopeful of a successful 2018 season. Photo: BUKC

“We were mixing drivers quite a lot so there wasn’t any continuity throughout the season,” he said.

“It’s like we didn’t know who our best drivers were for the separate teams.

“Also we weren’t slow I think we were just extremely unlucky with getting involved with incidences.”

But captain Andrew Hunt, 20, is optimistic that his team can come away with a few impressive races in the coming campaign.

“My hope for this year is to be one of the top intermediate teams,” Hunt said

“As we only narrowly missed out on being a premier team, I’d like us to get on the podium at least once.”

Up and coming stars

One of the team’s brightest prospects, James Manning, was on course for a podium finish during Sunday’s qualifiers as he went into the last lap in third place, a position that might have given the team a premier league spot

“He’s done some karting before and was doing a very good job in qualifying.

“But he got pushed on the last lap when he was in third and was forced wide which resulted in him spinning out and going off the track.”

While the A team qualified for the national tournament, the B team did not and will have to compete in the rooky league for the year.

The Kingston team narrowly missed out on a premier league spot on Sunday. Photo: BUKC

But the drivers have found the positives in this.

“We’ve got so many people in the society who are interested,” Hunt said.

“So I’d like to get as many of them in the karts as possible just to give them a go, and the experience should benefit us next year as well as they’ll be more used to racing.”

Righton is also excited, saying: “What tends to happen is we get a whole bunch of people interested at the start of the year, and that just drops off massively by about November when everyone realises how expensive it is.

“But I’m glad to say we have a lot of freshers who are committed to doing a lot of races this year.”

Each team competing in the championships use identical karts provided by the race organisers Club 100. 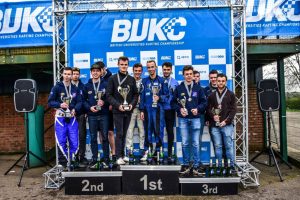 2017 winners Loughborough hold their trophies at the top of the podium. Photo: Karting Magazine

“It’s probably a good thing all the karts are the same,” Hunt said.

“It gets rid of the excuse that people are working on their karts to gain an advantage and leaves the racing solely to driving talent.”

The Kingston team will get their 2018 campaign underway on January 31 alongside their 26 rival universities from across the UK at Buckmore Park in Kent.

They will compete in eight different events with two races at each.

You can watch highlights of last year’s final race below.