A controversial Muslim speaker may be allowed to return to Kingston despite his support for convicted terrorists.

No ban for extremist preacher at KU

Written by River Reporter on October 30 2013 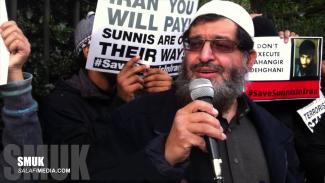 A controversial Muslim speaker may be allowed to return to Kingston despite his support for convicted terrorists.

Under the students’ union’s rules, the preacher will be allowed to return to the University as long as members of KUSU and security are present.

However, the visit has been deeply controversial because of Dr Fikry’s reported links to the alleged killers of Drummer Lee Rigby and his support for known terrorists and extremist speakers.

KUSU faith representative Hassan Al-Abbadi said: “I have major disagreements with Dr Fikry and I challenge his position.

“However, I can appreciate the sincerity of the Islamic Society in inviting him. I don’t feel that they wish to promote sectarian tensions on campus.

“But I would encourage them, as a Muslim and as a University faith representative, to invite somebody with a less questionable history in the future.”

Kingston Metropolitan Police tweeted they were aware of the planned meeting: “His visit went ahead without incident and officers will continue to liaise with the University in the future.”

Concerns were raised after a YouTube video was uploaded in which Dr Fikry is seen to be stirring hatred between Sunnis and Shias.

In one video, Dr Fikry, a Sunni Muslim, accuses Shia Muslims of believing that “killing the Sunni is to raise your rank in paradise, raping a Sunni woman is a matter that pleases Allah”.

Al-Abbadi said: “This speaker has a very tunnel-minded and exclusive mentality. His words are adding fuel to an already blazing sectarian fire. He is making absurd claims that Shia endorses wild behaviour, which is an outright lie.

“I couldn’t bear to watch more than 20 minutes of the video because I felt it was propaganda demonising Shia Muslims, stirring emotions and ultimately promoting violence and hatred.”

Dr Fikry’s views came under scrutiny when he held a speech outside Belmarsh high security prison in south-east London last year, in which he praised the jailed Omar Abdel-Rahman, who is known as the “Blind Sheik”.

Abdel-Rahman was investigated by the FBI for his role in plotting the first World Trade Centre bombing in 1993. He was also accused of being the leader of a terror group which killed 58 foreign tourists, including six Britons and four Egyptians in the 1997 Luxor massacre.

In the speech at Belmarsh, Dr Fikry accused the Americans of organising a “conspiracy” against Abdel-Rahman.

Hamza was extradited from the UK in 2012 for encouraging the murder of non-Muslims while Qatada was deported earlier this year for his alleged connections with al-Qaeda.

Rupert Sutton, researcher at Student Rights, an organisation tackling extremism at universities, said his presence was likely to create an “unwelcome or even unsafe” environment.

He said: “Allowing a sectarian speaker with a history of speaking out in support of convicted terrorists to be presented as a religious authority for students to learn from would be a gross negligence of duty by the students’ union.

“Universities and students’ unions should assess speakers, particularly those due to be on campus on a regular basis, on the likelihood that they will breach public order offences or university equality policy and we feel that given Dr Fikry's history, that risk does exist.”

A joint statement issued by the University and KUSU said: “Due to Dr Fikry’s high-profile media presence, he was placed in the high risk category.

“Dr Fikry has been a speaker at Islamic Society events twice before his speech this month. In both instances, the policies and regulations, including extensive background checks, were followed.

“This will also be true for any future events with Dr Fikry, or any other speaker. It should be noted that no concerns have been raised about the content of Dr Fikry’s speeches to date.

“Had there been complaints, or evidence that he had breached the values in the statement, KUSU would not have allowed him to speak again.”

Omar Malik, 21, president of the Islamic Society, said: “These people are making a big deal out of nothing.

“We’re teaching Fiqh of Sala, any Muslim could have come in and listened and we would have said nothing. There were Shias in the room. The basics of prayer is something simple and yet important for every Muslim.”

Malik said that the Islamic Society has a good relationship with the SU.

“Dr Fikry did tell us that he has been getting problems from other universities he has been to,” he added.

“We said, it is fine we’ll have you and get you cleared from the students’ union. The University will know you’re going to be here.”

Malik said it had been a successful event that united many Muslims on campus.

“There are many positive things about Sheikh Khaled Fikry and we stand by those.

“I’m not going to defend him, but what I think we need to understand is that the video that was published on the Student Rights website was of a conference that was set up to discuss issues in Syria.”

Nasreen Uddin, 19, a pharmacy student who attended the lecture, confirmed that the YouTube video had nothing to do with the lecture given at Kingston this month.

She said: “I don’t feel that he upset anyone. There was no possibility of him doing so because the content of his lecture could not sway to such discussions. It was a lecture of rules and regulations of prayer, not one of pointing fingers.

“I thoroughly enjoyed the lecture. It was well executed with useful information that we Muslims are in need of on a daily basis. He answered questions that were on everyone’s mind.”

The Islamic Society originally planned on Dr Fikry giving fortnightly classes. However, KUSU has said permission was only given for one event.

Dr Fikry’s intended classes have been cancelled, but the speaker has not been banned and the Islamic Society is currently processing another request that needs KUSU approval.

A statement sent by the University to the Student Rights website said: “Now that we have been made aware of the classes, we will be ensuring a formal request is made through the normal channels at both the University and the students’ union.

“This request will be considered in line with the University’s policies."