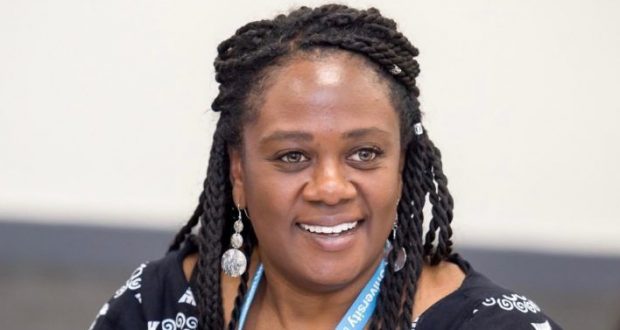 Written by Sophie Parrott on January 19 2018

A former Kingston University nursing student, who invented an aid to support the application of compression stockings to prevent deep vein thrombosis, has been presented with a British Empire Medal award for her services within nursing and healthcare.

Neomi Bennett, who graduated from Kingston in 2012, invented the Neo-Slip while researching for a university assignment in 2011.

She said: “It was unbelievable. I have worked so hard on this business and I get support from my patients and nurses but I never even thought for one minute that anyone else would think that it warranted an award.

“I received a letter in the post from the Cabinet Office to say that they had put my name forward to the Queen. I was in shock.”

British Empire Medals (BEM) are awarded for ‘hands-on’ services to the local community, including innovative work of relatively short duration, that have made a significant difference.

In 2011, Bennett entered Neo-Slip into Bright Ideas, the university’s annual competition which seeks to find new and innovative talent, and finished in first place.

Her prize was £1,000 which she put towards getting some Neo-Slip prototypes made up.

The nursing graduate credits Kingston University and fellow students, who helped her to launch a website and create a video for the product, for contributing towards her success.

She said: “The support from Kingston and the enterprise team has been invaluable. They helped me to understand aspects of the business that I didn’t even consider. Now I’m reaping the benefits of the business.”

The Neo-Slip started to sell at the end of 2013 and by 2015 Bennett started to get repeat customers.

Bennett’s medical aid is now supplied to 34 hospitals around the country and is available on NHS prescription.

The nursing graduate and entrepreneur has encouraged other KU students to “focus on small tangible tasks that you can do towards your goal”.

“In order for you to chase your dream, you need to believe that everything will fall into place. Whatever opportunity you see, just go for it,” she added.

Bennett works on her business full-time but tries to fit in at least one community shift at the hospital per month because she loves being a nurse.

She has recently submitted a patent for a new hospital gown, which she hopes to launch later this year.

Head of the school of nursing at Kingston University, Julia Gale, said: “Neomi’s success brings the School of Nursing recognition of the calibre of student nurses that join our programmes. It highlights to other students that we will nurture and develop talent and provide every opportunity for student nurses to excel during their studies.

“Success of this nature brings external reputational value to the School and University within the healthcare arena and beyond,” she added.