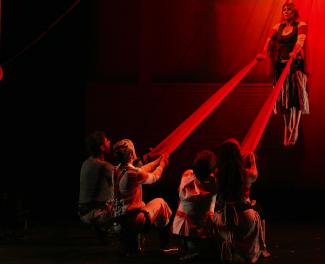 This week the Rose brings a spiced up adaptation of the classic play Medea which mixes singing and acrobatic dancing.

Medea tells the story of a woman scorned after losing her husband to another woman, of the vengeance she exacts on him and of the terrifying consequences of her fury. It is a tense drama of sexual jealousy.

The Greek masterpiece of rejection, tragedy and revenge has been transformed into an innovative version and is brought vividly to life in this adaptation. Powerful storytelling is combined with dangerous and breathtaking aerial dance.

The show was primarily about Medea’s emotions. Her initial pain and fear turn into desperation and pure anger.

The play visually shows the different stages of emotions which were dramatically reflected in the aerial dances.

Tamsin Shasha was able to play a genuinely broken-hearted Medea who turned into a vindictive woman. She did a wonderful job – especially in the air. Her sadness, her anger, her frustration and her madness were reflected in the way she danced off the ground with the help of red ropes and cloths.

She said: “It's an interpretative piece. We wanted to use physicality in the play to show the mortality. It also reflects the manipulation and empowerment. It's very original and unique and that's why we used aerial performance.

“Tuesday was the first night of the play in Kingston and it went really well. It was exciting and the adrenaline kicked in massively before. We’re really glad that we got a good response.“

The acrobatics were not the only impressive side of the play. The actors‘ singing gave you goosebumps as they reflected the sad, dark and somehow scary tone of the play.

The cast included Kino McDonald, Ewan Downie, Belinda Skyes and of course Tamsin Shasha which all belong to the group Actors of Dionysus – a collaboration of people  which try to ensure that ancient Greek drama is made accessible to modern audiences. They create contemporary performances and transform ancient themes into new, relevant and powerful theatre versions.

Unfortunately, the end of the play came a bit abruptly as if they had run out of time.

But all in all, a really original take on Euripides's Medea. Impressive, touching, daring, powerful, dynamic, emotional and definitely worth watching.

The play will be shown until Friday. Running time is approximately 80 minutes and tickets can be bought at the box office, online or via telephone: 0844 4482 1556. Students get £3 off the tickets which are either £16 or £8.