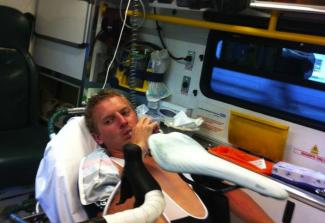 KU students have not been deterred from cycling after six cyclists died on the streets of London, although many worry about their safety.
All the incidents happened in the centre of the city over the past fortnight, and all but one involved collisions with a lorry or bus.
Ellie Brooks-Shorland, a third year filmmaking student and member of the cycling club said: “It’s truly shocking. With such a short amount of time six cyclists have been crushed or squished in between lorries, buses and cars. That for me is terrifying.”
Mini Holland
Kingston is, however, one of the safest boroughs in London for cycling according to Eric Chasseray, the cyclist training coordinator for Kingston.

Mr Chasseray said: “Kingston has been granted to develop a “mini Holland” type of cycling infrastructure."
"It is improving access on the main Kingston road arteries where most collisions happen such as Kingston Road, New Malden.”
The Council will be putting forward a bid next month for a share of £100 million to improve cycle lanes in the area.
Plans could include a pontoon-style cycling path by the river all to encourage more people to cycle.
However Kingston is not danger-free.
Ilona Mosejeva, a second year international relations student, was knocked off her bike at a roundabout in New Malden a year ago while cycling home from university.
“I was going to turn right, and all the cars stopped and as I was turning a car just cut in front of me as if I was a ghost,” she said.
Dangerous cyclists
Other KU students have been involved in accidents recently but say they will continue to ride.
Josh Dines, a third year financial economics student, was sent to hospital last July after a collision with another cyclist on the Blackfriars underpass.
“The incident did not deter me from cycling, however I am now much more wary of my surroundings while cycling, and assume everyone and everything is out to knock me off.”
But it is not always the motorists who are at fault. Ms Brooks-Shorland said: “Many times I have witnessed cyclists jump red lights, ride on pavements, or just go too fast.
"This really gives cyclists a bad image especially to drivers who then have the right to criticise us.”
cyclists dead kingston cycling 2013-11-20
River Reporter