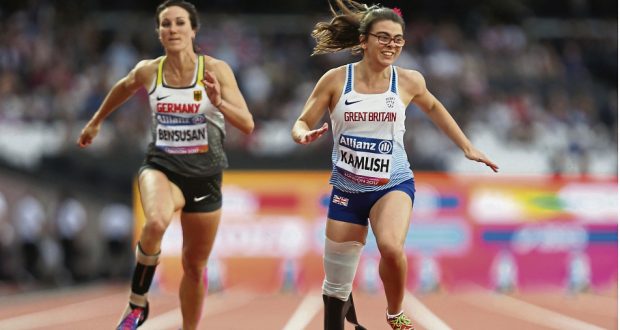 Written by Hannah Roberts on February 16 2018

A KU illustration and animation student and para-athlete who holds the world record for the T44 100m sprint will fly to Dubai in March for the World Para Athletics Grand Prix.

Sophie Kamlish, a second-year student who has worn a lower-leg prosthesis since she was nine, broke her own world record during the heats of last year’s World Championships in London with a time of 12.90 seconds.

The 21-year-old normally trains six times a week and catches up with her university workload on Sundays, but since the indoor season started she has had to give up her only day off in order to compete.

She said: “Doing the illustration animation course makes fitting in training really hard because of how busy I am. I’m also in a constant state of exhaustion – but it worked out okay in first year so I’m going to keep trusting the process.

“I make sure I try to start all my projects really early and let my tutors know if competing will interfere with any of my studies.”

The Dubai Grand Prix will be Kamlish’s first 100m race of the season.

She reached the finals of both the London 2012 and Rio 2016 Paralympics and even broke her first world record during the heats at Rio. She placed fourth in the final.

The Bath-based athlete will also compete in the 60m sprint in the Müller Indoor Grand Prix Glasgow on February 25.

Kamlish said that she tried swimming, wheelchair basketball and sitting volleyball all before she tried athletics and believes that there is a sport out there for anyone.

She is part of KU’s Sports Performance Programme, which helps students to balance busy academic and sporting schedules.

Kamlish told Kingston University last year: “Being an amputee competing at a high level is something that I think brings a different perspective to my illustrations. There aren’t many of us out there so it’s something I’d really like to take forward in the future.”